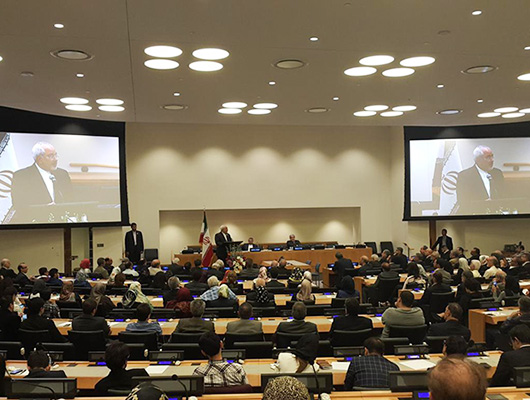 Iran’s foreign minister says the Al Saud regime is doing everything to keep the support of the United States as the kingdom sees its existence tied to such patronage.

Mohammad Javad Zarif made the remarks in a Saturday meeting with US-based Iranians in New York, where the 71st Session of the United Nations General Assembly is underway.

“The attitude maintained by some regional rulers like the Saudis is so that they risk life and limb not to lose US support and keep lobbying them [the Americans] as they consider all their legitimacy and existence to be tied to US backing,” he said.

The likes of the monarchy rely on foreigners, instead of their own people, to ensure their own safety, he said. “That is what separates them from us.”

Iranians have, however, refused to bow to pressure and threats, said the Iranian minister.

“Iranian people are our security,” said Zarif, stressing that sanctions “cannot separate Iranians from their causes and beliefs.”

He further said the Islamic Republic has now returned to positive economic growth as it managed to turn to its advantage the same sanctions that caused fluctuations in global oil prices.

The economic progress came about, “while we are yet to witness [all] the positive consequences of the JCPOA due to the United States’ addiction to sanctions,” he concluded.

Zarif was using an acronym for the 2015 deal on the Iranian nuclear deal, known as the Joint Comprehensive Plan of Actions, under which Tehran agreed to roll back certain aspects of its nuclear program in exchange for the removal of its nuclear-sanctions.