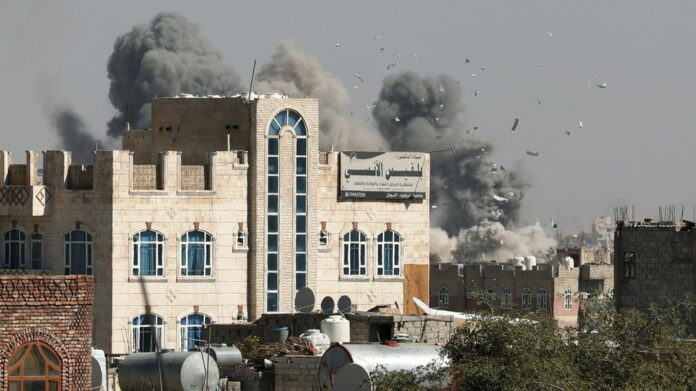 The war coalition also attacked Raymat Humaid area in Sanhan district of Sana’a province and Sihar and Harf Sufyan districts, which are located in Sa’adah and Amran provinces, respectively.

The latest round of Saudi-led onslaught against Yemenis comes as the Yemeni Army’s Missile Force launched ballistic missiles toward the southwestern Saudi region of Asir and also pounded the positions of Saudi-backed mercenaries in the Yemeni provinces of Ma’rib and Ta’izz.

Saudi Arabia, accompanied by its allies, launched the war on Yemen in 2015, to bring the Mansour Hadi government back to power and crush the popular Ansarullah movement.

Instead of achieving the professed goals, however, the Saudi-led war has left hundreds of thousands of Yemenis dead and displaced millions more. It has also destroyed Yemen’s infrastructure and spread famine and infectious diseases.

Meanwhile, Yemeni Foreign Minister Hisham Sharaf Abdullah called on the international community to address the root causes of the humanitarian crisis in Yemen, represented by the Saudi-led aggression and siege.

The Yemeni humanitarian file should be given priority and not be compromised or used as a political card, Abdullah said during a meeting with the head of the Office of the United Nations Resident Coordinator in Sana’a, Mathew Leslie, on Wednesday.

The chief Yemeni diplomat called on the UN Security Council to pay attention to the Yemeni people’s suffering and find appropriate solutions to end the suffering.

The Saudi-led war on Yemen has been accompanied by a tight siege that has led to fuel shortages in Yemen, devastated daily life in the impoverished country, and even prevented the entry of medicines and medical supplies into the country.

Meantime, according to the Yemen Petroleum Company (YPC), the Saudi-led coalition is detaining three Yemeni tankers carrying more than 80,000 tons of diesel, preventing them from reaching the port of Hodeidah despite the fact that the ships have obtained UN permits and were inspected in Djibouti.

In a statement, the YPC announced the tankers have been detained for 81 days of “unprecedented piracy.”

“All tankers have completed all UNVIM procedures in Djibouti and obtained United Nations permits,” the company explained, stressing that the cargo “complies with the conditions contained in the concept of verification and inspection operations.”

The YPC pointed out that in the face of “criminal piracy and its catastrophic repercussions,” no serious and tangible action has been taken by the UN, despite the fact that it is the international body concerned with facilitating the entry of imports of basic commodities.