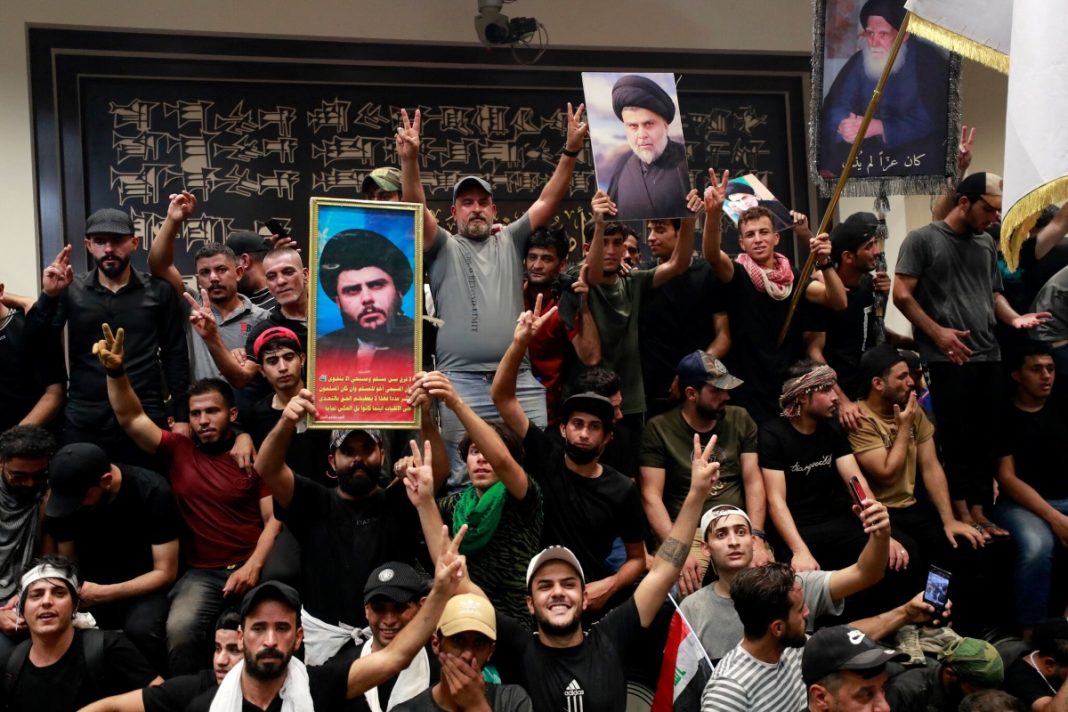 Supporters of Iraqi cleric Muqtada al-Sadr have vowed to continue to remain inside the Iraqi parliament after they breached Baghdad's heavily fortified "Green Zone" and occupied the country’s legislature for a second time in days.

“The demonstrators announce a sit-in until further notice,” Sadr’s movement said in a brief statement to journalists carried by the Iraqi News Agency (INA).

On Saturday, supporters of the mercurial cleric forced their way into the legislative chamber after they had gathered at the end of a bridge leading to the Green Zone, brandishing Sadr’s portraits and pulling down concrete barriers.

Security forces had to fire tear gas and water cannon near an entrance to the zone, which is home to foreign embassies and other government buildings.

Some protesters on the bridge sustained injuries and were carried off by their fellow demonstrators, with the health ministry saying at least 100 protesters and 25 security personnel had been hurt.

The state-run news agency reported Prime Minister Mustafa al-Kadhimi had called on the protesters to adhere to a peaceful demonstration, not to escalate the situation, and to abide by the orders of the security forces.

Sadr’s supporters, opposing the recently-announced nomination of Mohammed al-Sudani for premier, also occupied the parliament building on Wednesday and left the area two hours later upon the cleric’s orders.

Sadrist lawmakers quit their seats at the Iraqi parliament last month, in a move viewed as an attempt to pressure their rivals into fast-tracking the formation of a government.

Intense negotiations between rival factions, mainly the Sadrists and Coordination Framework, over the past several months have failed to bridge the divide.

Kadhimi urged Iraq’s political blocs “to sit down, negotiate and reach an agreement,” to resolve outstanding issues and avoid bloodshed.

“The political blocs must sit down, negotiate and reach an agreement for the sake of Iraq and the Iraqis, and the language of treason and exclusion must be avoided, and a high and inclusive patriotic spirit must be displayed. A thousand days of quiet dialogue is better than a moment in which a drop of Iraqi blood is shed,” Kadhimi was quoted as saying by INA.

“I call on everyone to be calm, patient, and rational, and not to be drawn into confrontation, and I call on citizens not to clash with the security forces and to respect state institutions. We must all cooperate to stop those who accelerate this sedition, and everyone must know very well that the fire of sedition will burn everyone,” he added.

Stressing that everyone must act according to the rules of wisdom and insight for the sake of Iraq, the premier stated, “We will bear the responsibility, and we are ready to do anything for Iraq, without hesitation… The dilemma is political, and its solution is political, and the solution is possible through sincere and constructive dialogue, and making concessions for the sake of Iraq and the Iraqis.”