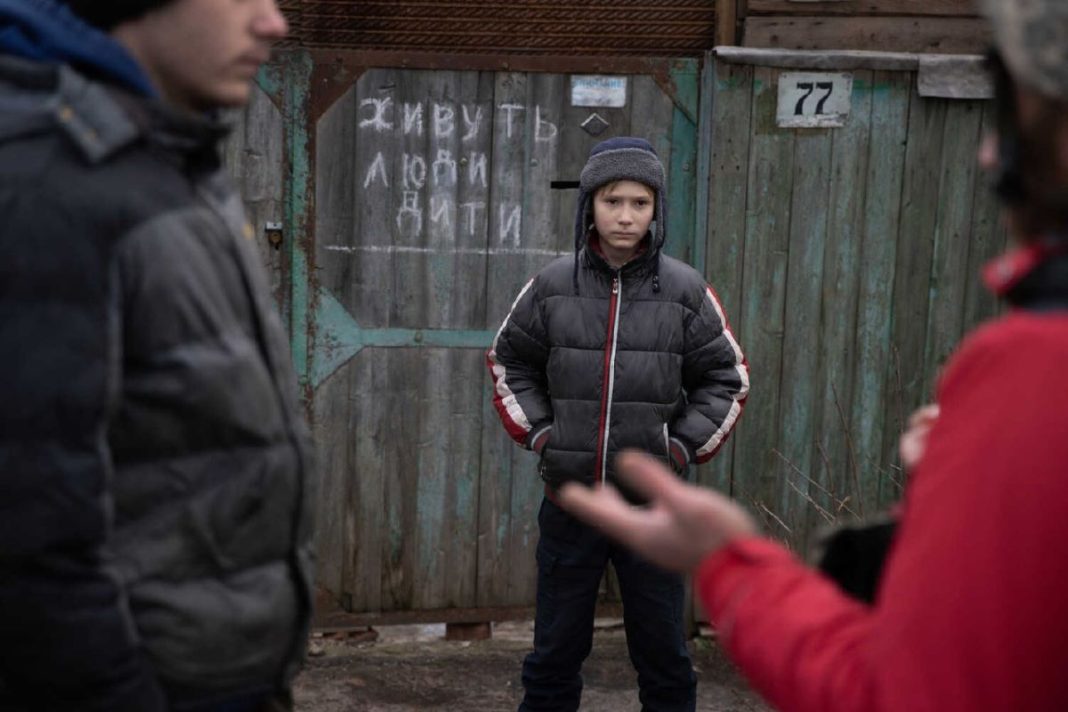 British Prime Minister Rishi Sunak has urged fellow European leaders to ignore any calls by Moscow for a ceasefire until it withdraws from its conquered territories in Ukraine.

At a meeting in Riga, Latvia of the Joint Expeditionary Force, the PM said allies must deliver for military aid and weaponry as well as ignore “meaningless” calls for ceasefire.

“We must be clear that any unilateral call for a ceasefire by Russia is completely meaningless in the current context,” added Sunak.

“I think it would be a false call, it would be used by Russia to regroup, to reinforce their troops. And until they have withdrawn from conquered territory there can and should be no real negotiation,” he continued.

“But what we can do is think about that time now, think about what will do with regard to security assurances,” the PM said.

He added that the alliance must continue to focus on “degrading Russia’s capability to regroup and resupply”.

This involves “going after its supply chains and removing the international support”, in particular being “strong” in critical about Iran for supplying drones to Moscow.

Russia is using “poorly-trained convicts” to boost its assault on Ukraine, says the British Ministry of Defence.

Russian military proxy group, Wagner, is continuing to play a major role in attacks in Bakhmut, eastern Ukraine and are often supplied with little protective equipment.

The group’s recruits are treated as “expendable” and are “likely being threatened with summary execution,” adds the MoD in its latest update.

Ukraine would be better able to defend itself from drone and missile attacks by Russian forces if it were provided with fighter aircraft and Patriot missile defense systems, according to a spokesman for the Ukrainian Air Force.

Speaking on Ukrainian television on Monday following a wave of drone attacks on the country, Yurii Ihnat said that “F-15 and F-16 aircrafts could effectively fight the threats that we have today — missile attacks and attacks by drones.”

“Fighter aircraft can effectively destroy such targets,” he continued, adding, “Aircraft, aircraft platforms, Patriot systems would help us a lot.”

Last week, CNN revealed that the US was finalizing plans to send the Patriot missile defense system to Ukraine.

Ukraine has been calling for the US to send the Patriot, the US’ most advanced ground-based air defense system, which is highly effective at intercepting ballistic and cruise missiles, as it comes under a barrage of Russian attacks that have destroyed key infrastructure across the country.

It would be the most effective long-range defensive weapons system sent to Ukraine, and officials say it will help secure airspace for NATO nations in eastern Europe.

Kremlin: Putin will not push Belarus to join conflict

As Russian President Vladimir Putin travels to Belarus to meet his presidential counterpart, the Kremlin dismisses any ideas that Putin will be pushing for Minsk to take a more active role in the war, the RIA Novosti news agency reported.

Putin will visit Minsk for the first time in more than three years.

The Kremlin says it is still considering what measures it will put in place in response to the G7 price cap on Russia’s oil exports, the state-run TASS news agency reported.

Moscow had initially planned to publish a presidential decree outlining its response, including a possible ban on selling oil to countries that comply with the cap, last week, Kremlin spokesman Dmitry Peskov told reporters.

“There is some groundwork that has been put down on paper, but there are also additional proposals that are being considered and discussed,” he continued, adding, “We still have the task of working out what measures will best suit our interests. The work is ongoing, but it is close to completion”.

“I ask you to increase the possibility of supplying air defence systems to our country, and to help speed up the relevant decisions to be taken by our partners,” Zelensky asked British Prime Minister Rishi Sunak during his speech on a video link, addressing a meeting in Riga of leaders of countries in the Joint Expeditionary Force.

While Western allies, led by the United States, have supported Ukraine with funding, military training and deliveries of air defence systems and other weaponry, Kyiv has said still more was needed to sustain its campaign against Russia.

More than 98,800 Russian troops have been killed during the ongoing war against Ukraine, according to the Ukrainian military.

Over 10,000 Russian APVs, vehicles and tanks have also been destroyed as well as some 500 planes, helicopters and boats.

These are the indicative estimates of Russia’s combat losses as of Dec. 19, according to the Armed Forces of Ukraine. pic.twitter.com/PYT0CKzH9E

Air raid alerts across Kyiv and most of Ukraine

An air raid alert has been issued across Kyiv and most of Ukraine, according to officials.

A critical infrastructure facility was damaged in a Russian drone attack in Kyiv on Monday, according to a Ukrainian military commander.

Serhiy Popko, head of Kyiv’s military administration, said on Telegram that Ukrainian forces shot down 18 of the 23 drones launched by Russia at the capital on Monday.

Popko added that two districts of the capital bore the brunt of the damage. A road in Solomyanskyi district was damaged and fragments of a drone landed on a high-rise residential building in Shevchenkivskyi district.

Two people were injured in the attacks, which come after several cities in Ukraine, including Kyiv, were hit by Russian missile strikes on Friday that dealt a major blow to the country’s civilian infrastructure, leaving many people without light, power or heat.

The Kyiv City military administration gave the all-clear after the capital came under fire from what it said was “a barrage of ammunition.”

The new attacks come as several cities in Ukraine, including Kyiv, reel from a series of Russian missile strikes on Friday that dealt a major blow to the country’s civilian infrastructure, leaving many Ukrainians without light, power or heat.

Ukrainian President Volodymyr Zelensky said electricity had been restored to a total of 9 million Ukrainians, as the country recovers from a barrage of Russian attacks that hit on Friday.

“Another 3 million Ukrainians have had their energy supply restored,” the president stated.

He noted the return of power was “already a result for 9 million of our people.”

In most of Ukraine’s cities transport operations have returned to normal, he added.

British Prime Minister Rishi Sunak is set to announce a new $304m package of military aid for Ukraine to bolster its counteroffensive against Russia.

The package includes “hundreds of thousands of rounds of artillery” and aims to ensure “a constant flow of critical artillery ammunition to Ukraine throughout 2023”, a statement from the prime minister’s office announced on Monday.

Sunak will make the announcement during a summit of the Joint Expeditionary Force (JEF) in Latvia later on Monday, his office said.

The JEF summit brings together leaders from Denmark, Estonia, Finland, Iceland, Latvia, Lithuania, the Netherlands, Norway, Sweden and the United Kingdom, and was called to discuss the “ongoing efforts to counter Russian aggression in the Nordic and Baltic regions”, the statement added.

At the meeting, Sunak will call on Nordic, Baltic and Dutch counterparts to maintain or exceed 2022 levels of support for Ukraine in 2023.

“We have also provided more than 100,000 rounds of ammunition since February, with the deliveries directly linked to successful operations to retake territory in Ukraine,” it noted.

Ukraine slams Kissinger over call to negotiate with Russia for peace

The Ukrainian government has dismissed as “appeasing the aggressor” calls by veteran US diplomat Henry Kissinger that the time had come for a negotiated peace with Russia in order to reduce the risk of a devastating world war.

Former US Secretary of State Kissinger, architect of the Cold War policy of detente towards the Soviet Union under disgraced US President Richard Nixon and later President Gerald Ford, made the proposal in an opinion piece published in the Spectator magazine.

“I have repeatedly expressed my support for the allied military effort to thwart Russia’s aggression in Ukraine,” Kissinger wrote.

“But the time is approaching to build on the strategic changes which have already been accomplished and to integrate them into a new structure towards achieving peace through negotiation,” he added.

“The preferred outcome for some is a Russia rendered impotent by the war. I disagree,” Kissinger continued.

“For all its propensity to violence, Russia has made decisive contributions to the global equilibrium and to the balance of power for over half a millennium. Its historical role should not be degraded. Russia’s military setbacks have not eliminated its global nuclear reach, enabling it to threaten escalation in Ukraine,” he added.

Kissinger, who has met Russian President Vladimir Putin multiple times, proposed at the World Economic Forum in Davos in May that Ukraine should let Russia keep Crimea, which it annexed in 2014, and that Russia withdraw to the front lines before its February 2022 invasion.

“Mr. Kissinger still has not understood anything … neither the nature of this war, nor its impact on the world order,” Ukrainian presidential aide Mykhailo Podolyak said on Telegram.

“The prescription that the ex-Secretary of State calls for, but is afraid to say out loud, is simple: appease the aggressor by sacrificing parts of Ukraine with guarantees of non-aggression against the other states of Eastern Europe,” he added.

Ukraine has said that it does not believe that Putin — who has said that he is prepared for a long war in Ukraine — is serious about peace, and that there can be no peace until every Russian soldier leaves its territory, including Crimea.

Podolyak noted: “All supporters of simple solutions should remember the obvious: any agreement with the devil — a bad peace at the expense of Ukrainian territories — will be a victory for Putin and a recipe for success for autocrats around the world.”

Kremlin officials were not available for comment late on Sunday.

In May, Ukrainian President Volodymyr Zelensky denounced suggestions that Ukraine should cede control of territory to Russia in order to secure peace, comparing such a move with the appeasement of Adolf Hitler’s Nazi Germany.

Those “great geopoliticians” who suggest this are disregarding the interests of Ukrainians, “the millions of those who actually live on the territory that they propose exchanging for an illusion of peace”, Zelensky said at the time.

“Whatever the Russian state does, you will always find someone who says, ‘let’s take its interests into account’,” he added.

CIA Director William Burns stated in an interview published on Saturday that while most conflicts end in negotiation, the CIA’s assessment was Russia was not serious yet about a real negotiation to end the war.