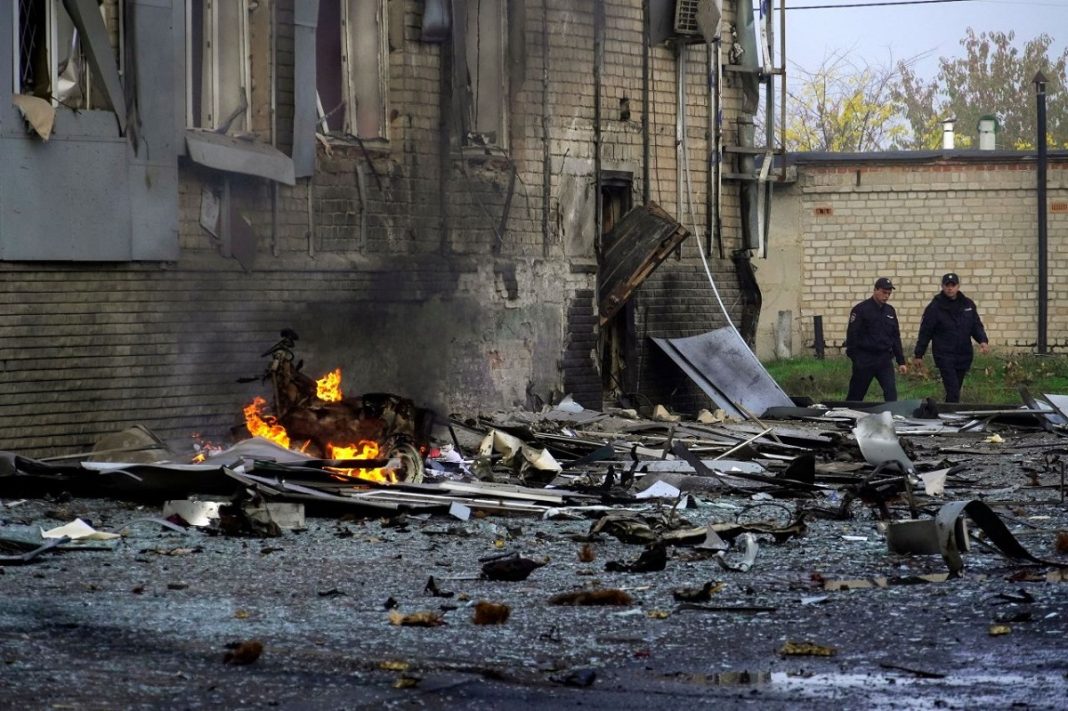 Biden speaks to Sunak and they agree on the importance of working together on Ukraine: White House

“The leaders reaffirmed the special relationship between our countries, underscoring their desire to further enhance cooperation on issues critical to global security and prosperity,” according to a readout from the White House.

“The leaders agreed on the importance of working together to support Ukraine and hold Russia accountable for its aggression, address the challenges posed by China, and secure sustainable and affordable energy resources,” it added.

They also discussed the future of the Good Friday Agreement, which largely ended three decades of conflict in Northern Ireland, including “the need to maintain momentum toward reaching a negotiated agreement with the European Union on the Northern Ireland Protocol,” the White House announced.

Ukraine is increasingly concerned that Russia is preparing to detonate a “dirty bomb” — a conventional explosive surrounded by radioactive material — on Ukrainian territory, because of Moscow’s persistent claims that Ukraine is building such a weapon, Ukrainian Foreign Minister Dmytro Kuleba said in a briefing.

“What is even more concerning is the persistence with which Russian officials pursue this false story. This makes us worry that Russia might itself be preparing to commit a crime, which it tries to cover in advance by spreading this disinformation,” Kuleba stated.

“Ukraine has never had a plan to develop any dirty bombs. This story is a pure Russian lie, and no one should be fooled by it,” Kuleba added.

Upon Ukraine’s request, the International Atomic Energy Agency is sending a team of nuclear investigators to inspect the two facilities that Russia alleges — without evidence — have been used to build a dirty bomb.

“We have nothing to hide,” Kuleba said.

“As President Volodymyr Zelensky said, even the dangerous Russian rhetoric on nuclear weapons and constant nuclear blackmail which we hear from Russia are unacceptable. They must be met with immediate and resolute actions,” he added.

Ukraine officially gave up nuclear weapons it inherited from the former Soviet Union in 1994, and Kuleba said that the country has no plans to acquire any more.

“Ukraine is a dedicated and responsible member of treaty of non-proliferation of nuclear weapons. We have never had, do not have and do not plan to develop any dirty bombs,” he continued.

German President Frank-Walter Steinmeier visited Ukraine Tuesday for the first time since the Russian invasion started, where he condemned Russia’s recent escalatory steps and promised a timely delivery of committed weapons to Kyiv.

The presidents met on the day Berlin hosted a conference on Ukraine’s recovery. Zelensky in a joint statement announced he had appointed Steinmeier as the patron of the reconstruction of the Chernihiv region.

The two leaders discussed Ukraine’s economic, financial and defense needs, particularly artillery systems, armored vehicles and other weapons, according to a readout of the meeting posted on Zelensky’s Telegram channel.

Speaking in Kyiv, Steinmeier vowed Ukraine will receive a delivery of Mars2-systems plus an additional two self-propelled howitzers from Germany in the coming days.

“Today, Germany is one of the leading suppliers to Ukraine’s air defense,” he added.

“Thirty Gepard tanks, three Mars2 multiple rocket launchers, several thousand anti-aircraft guns, one of the most modern air defense systems in the world, Iris-T. I hope it will help to make people a little safer, to protect them from Russia’s brutal aggression,” he noted.

This is Steinmeier’s first wartime visit to Ukraine after two failed attempts in April, when he was uninvited over his links with Russia, and last week when the visit was canceled for security reasons.

The German president is considered to have had close relations with Russia in his previous political roles. Ukraine has previously been critical of Steinmeier over his links with Russia and the leading role he played as former foreign minister in improving relationships with Russian leader Vladimir Putin.

The new Prime Minister of the United Kingdom Rishi Sunak has promised Volodymyr Zelensky that his country’s support for Ukraine would be “as strong as ever”, a Downing Street spokesperson says.

“The prime minister said the United Kingdom’s support for Ukraine would be as strong as ever under his premiership and President Zelensky could count on his government to stand in continued solidarity,” the spokesperson said after the two leaders spoke by phone.

“Both leaders agreed on the need to continue to place pressure on Vladimir Putin’s barbaric regime through continued economic sanctions,” the spokesperson noted, adding, “… [Sunak] said he hoped they would see each other in person soon.”

Russia’s occupying forces are establishing a paramilitary guard in the southern Zaporizhia region as they have done in Kherson.

The new Territorial Defence Force was established as Moscow struggles to hold onto territory in the face of a counteroffensive by Kyiv. It will be tasked with guarding roads, bridges, railway tracks, factories and infrastructure objects, administration chief Yevgeny Balitsky said.

If necessary, it will also be deployed “in front-line defence”, Russian news agencies quoted him as saying.

Russia’s warning that Ukraine is preparing to use a radiation-spewing dirty bomb fits Moscow’s track record of deception when it “accuses others for what they intend to do themselves,” NATO’s chief has told AFP in an interview.

“Russia continues to accuse falsely Ukraine for preparing and making a dirty bomb,” Jens Stoltenberg said during a visit to the US aircraft carrier USS George HW Bush in the Mediterranean.

“That is absurd because why should Ukraine use a dirty bomb on the territories they want to liberate?” he asked.

US President Joe Biden has warned Russia against using a nuclear weapon in the war with Ukraine, saying such an escalation would be a grave error.

Asked by reporters whether he thinks Russia is preparing a dirty bomb attack that it would then blame on Ukraine, Biden stressed, “Russia would be making an incredibly serious mistake were it to use a tactical nuclear weapon.”

Russia has taken its accusation that Ukraine is preparing to use a dirty bomb – an explosive device laced with radioactive material – to the United Nations Security Council, voicing its concerns during a closed-door meeting of the 15-nation body.

“I don’t mind people saying that Russia is crying wolf if this doesn’t happen because this is a terrible, terrible disaster that threatens potentially the whole of the Earth,” he added.

Russia has alleged that Kyiv has ordered two organisations to create a dirty bomb, but it has yet to give any evidence for the accusation. Russian UN Ambassador Vassily Nebenzia sent a letter to the world body on Monday about the allegation.

When asked what evidence Russia had to back its claims, Polyanskiy told reporters that it was intelligence information that had been shared with Western counterparts with the “necessary level of clearance”.

Chechen strongman Ramzan Kadyrov has repeated his criticism of the progress of Russia’s war on neighbouring Ukraine, slamming Russia’s leadership as weak.

“We used to say that we were conducting a special military operation on the territory of Ukraine, but the war is already taking place on our territory,” Kadyrov said on Telegram while also threatening Ukraine’s Western allies with annihilation.

Martial law has been imposed in border regions with Ukraine, Kadyrov stated, “but they continue to shoot at peaceful citizens and civilian objects.” Russia’s response to this has been “weak”, Kadyrov said.

He called for the obliteration of Ukrainian cities in retaliation “so that we can see the distant horizon”.

German chancellor: We will continue to support Ukraine for as long as it takes

German Chancellor Olaf Scholz stated that Germany will continue to support Ukraine in its war with Russia for as long as it takes.

“In light of the latest [Russian] attacks – now more than ever – recovery of a peaceful and prosperous Ukraine is our joint endeavor,” Scholz said in Berlin at the end of an international conference on rebuilding Ukraine.

“I am convinced that we are stronger together,” he added.

“I think today’s priorities are very natural because, during these two weeks, Russia destroyed our infrastructure, electricity infrastructure, heating infrastructure and water supply infrastructure, creating the biggest humanitarian catastrophe on the European continent,” Shmyhal said, adding, “And to start this, we need united efforts, and we need to create something to resist these intentions of terrorist country Russia.”