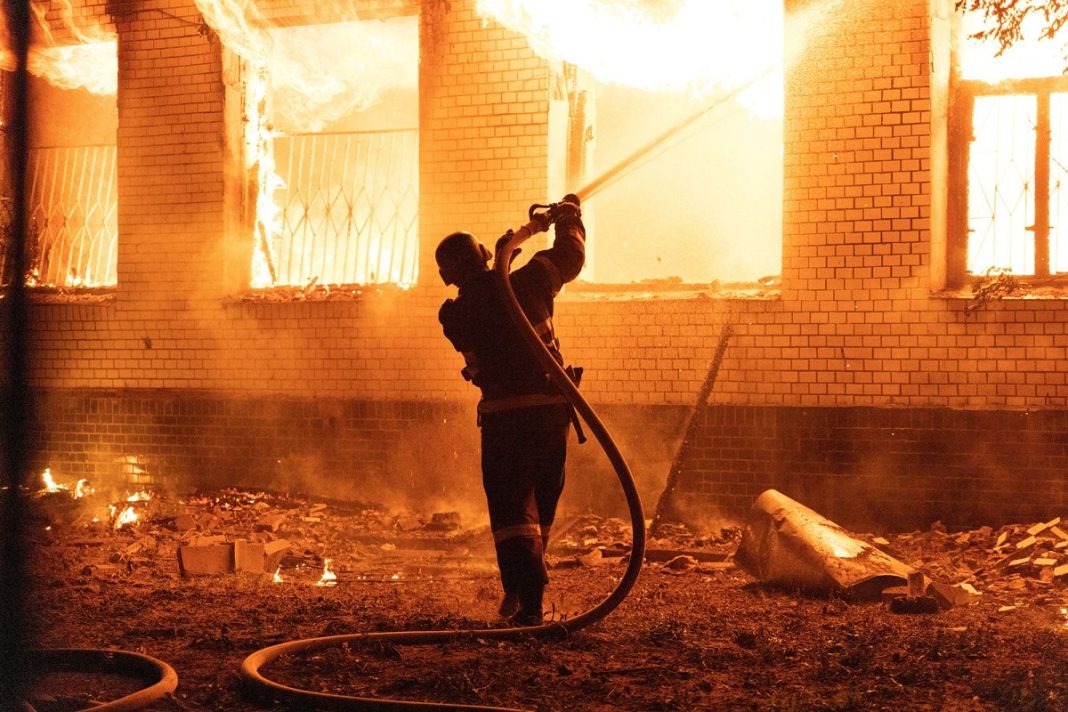 Two of the vessels – the Turkish-flagged Polarnet and the Maltese-flagged Rojen – departed from the Chornomorsk port. The other, the Panama-flagged Navi Star, left from Odesa’s port.

Combined, the vessels are loaded with more than 58,000 tonnes of corn and are heading for Turkey, Ireland and the United Kingdom. They had previously been stuck at the ports since the start of Russia’s invasion in late February.

Their departures come after the first grain shipment since the start of the war left Ukraine earlier this week. It crossed the Black Sea under the terms of a breakthrough wartime deal and passed inspection on Wednesday in Istanbul before heading on to Lebanon.

The UN-brokered agreement aims to ease a global food crisis by creating safe Black Sea shipping corridors to export Ukraine’s agricultural products. Checks on ships by inspectors seek to ensure that outbound cargo ships carry only grain, fertiliser or food and not any other commodities, and that inbound ships are not carrying weapons.

President Vladimir Putin has told President Recep Tayyip Erdogan he hopes to sign an agreement to boost trade and economic ties between Moscow and Ankara.

“I hope that today we will be able to sign a relevant memorandum on the development of our trade and economic ties,” the Russian leader said as the pair sat down for talks in Sochi.

Putin personally thanked Erdogan Friday for his role in the achievement of the grain agreements, which include export of Russian food and fertilizer.

“With your personal participation and with mediation from the UN Secretariat, the issue of export of Ukrainian grain from Black Sea ports was resolved. The shipments have already commenced, and I would like to thank you for that, as well as for the fact that a package agreement on export of Russian food and fertilizer to global markets was adopted simultaneously,” Putin stated.

He added that this issue is relevant “for very many countries, especially for the developing ones, which stand on the verge of major problems with food and fertilizer.”

“It is all these countries that such decisions, which happened with your direct involvement, are particularly important for. I would like to thank you for that,” the Russian leader concluded.

Bulgaria earlier this summer expelled 70 Russian diplomatic staff over espionage concerns and set a cap on the size of Moscow’s representation as relations between two countries that were once close allies fractured over the war in Ukraine.

In a statement issued on Friday, the Russian foreign ministry said the move by Bulgaria was evidence of the “further degradation of the collective West, which is ready to sacrifice the interests of partners in order to harm Russia”.

“The unconditional adherence of Sofia to this destructive line is regrettable,” it added.

Russia has banned investors from so-called “unfriendly countries” from selling shares in key energy projects and banks until the end of the year, stepping up pressure in the sanctions stand-off with the West.

The decree, signed by President Vladimir Putin and published on Friday, immediately bans investors from countries which supported sanctions on Russia from selling their assets in production sharing agreements (PSA), banks, strategic entities, companies producing energy equipment, as well as in other projects, from oil and gas production to coal and nickel.

Putin could issue a special waiver in certain cases for the deals to go ahead, the decree said, and the government and the central bank should prepare a list of banks for the Kremlin’s approval. The decree mentioned no investors by name.

The ban covers almost all of the big Russian financial and energy projects in which foreign investors still have stakes, including the Sakhalin-1 oil and gas project.

The human rights group, he stated, was “trying to shift the responsibility from the aggressor to the victim”.

Human rights group Amnesty International in a report on Thursday had accused Ukraine of endangering civilians by basing troops in residential areas during Russia’s invasion.

“We have documented a pattern of Ukrainian forces putting civilians at risk and violating the laws of war when they operate in populated areas,” the report quoted Agnès Callamard, Amnesty International’s secretary general, as saying.

Ukrainian forces say they struck several Russian ammunition and equipment depots in the Kherson region, as it continues its slow-moving counter-offensive to try and re-take lost territory in the South.

“Our attack aircrafts attacked two sites of enemy weapons and equipment in the Kherson and Kakhovka districts. A pair of helicopters destroyed an enemy stronghold in the occupied part of the Mykolaiv Oblast,” Ukraine’s Southern Command announced on Friday.

“Our missile and artillery units, during the execution of fire missions, densely attacked the enemy’s air defense system and logistics points, including those with ammunition in the Kherson district,” it also added.

According to the Ukrainian military, three ammunition and equipment depots were destroyed in the strikes, along with several S-300 anti-aircraft systems, a radar station, and nine armoured vehicles.

The actions taken by Russian forces at the Zaporizhzhia nuclear power plant have likely undermined security and the safety of the plant’s normal operations, Britain has announced.

“Russian forces have probably used the wider facility area, in particular the adjacent city of Enerhodar, to rest their forces, utilising the protected status of the nuclear power plant to reduce the risk to their equipment and personnel from overnight Ukrainian attacks,” Britain said in an intelligence update on Twitter.

Russia’s intentions regarding the plant remain unclear after five months of its occupation of Ukraine. Its forces are probably operating in the regions adjacent to the power station, having used artillery units based in these areas to target Ukrainian territory on the western bank of the Dnieper river, Britain added.

Russia ready to discuss prisoner swap with US: FM

Russian Foreign Minister Sergei Lavrov has said that Moscow is ready to discuss prisoner exchanges with Washington through an existing diplomatic channel.

“We are ready to discuss this topic, but within the framework of the channel that was agreed upon by Presidents Putin and Biden,” Lavrov added.

A Russian court sentenced US basketball star Brittney Griner to nine years in prison on drug charges on Thursday. Her sentencing could now pave the way for a US-Russia prisoner swap that would include the 31-year-old athlete and a prolific Russian arms dealer.

US: Russia aims to fabricate evidence in Ukraine prison deaths

According to the White House, new intelligence suggests Russia is working to fabricate evidence concerning last week’s deadly attack on the Olenivka Prison housing prisoners of war in a separatist region of eastern Ukraine.

United States intelligence officials have determined that Russia is looking to plant false evidence to make it appear that Ukrainian forces were responsible for the July 29 attack on the prison that left 53 dead, White House National Security Council Spokesperson John Kirby claimed.

“We anticipate that Russian officials will try to frame the Ukrainian Armed Forces in anticipation of journalists and potential investigators visiting the site of the attack,” Kirby stated.

In a statement, the European Council said the pair were added to an existing EU sanctions list set up “in response to the ongoing unjustified and unprovoked Russian military aggression against Ukraine”.

Three more ships filled with grain will sail from Ukraine on Friday under a UN-backed deal lifting Russia’s blockade of the Black Sea, Turkey’s defence minister has announced.

“It is planned that three ships will set sail tomorrow from Ukraine,” the Anadolu state news agency quoted defence minister Hulusi Akar as saying, one day after the first ship passed Istanbul on its way to Lebanon.

Russian forces have shelled a Ukrainian city close to Europe’s biggest nuclear power plant Thursday, reinforcing warnings from the UN nuclear chief that the fighting around the site could lead to a disastrous accident.

Dnipropetrovsk’s regional governor said Russia fired 60 rockets at Nikopol, across the Dnieper River from the Zaporizhzhia nuclear plant, which has been under Russian supervision since Moscow’s troops seized it early in the war.

Some 50 residential buildings were damaged in the city of 107,000, and residents were left without electricity, Valentyn Reznichenko wrote on Telegram.

“This behaviour of Amnesty International is not about finding and conveying the truth to the world,” foreign minister Dmytro Kuleba said in a video message posted on his personal Facebook page.

“It is about creating a false balance between the criminal and the victim, between a country that is annihilating civilian populations by the hundreds and the thousands, [is destroying] cities and entire areas, and a country that is desperately defending itself, saving its people and the continent from this invasion,” Kuleba added.

Canada will send up to 225 personnel to the United Kingdom to train Ukrainian military recruits, starting with the first troops next week, Canadian Defence Minister Anita Anand has noted.

Since 2015, the Canadian Armed Forces has trained more than 33,000 Ukrainian military and security personnel, but paused aspects of the training effort since February.

“We have now entered a new and very dangerous phase of this conflict with (Russia) engaging in a protracted attempt to inflict long-term damage on Ukraine and its people,” Anand added.