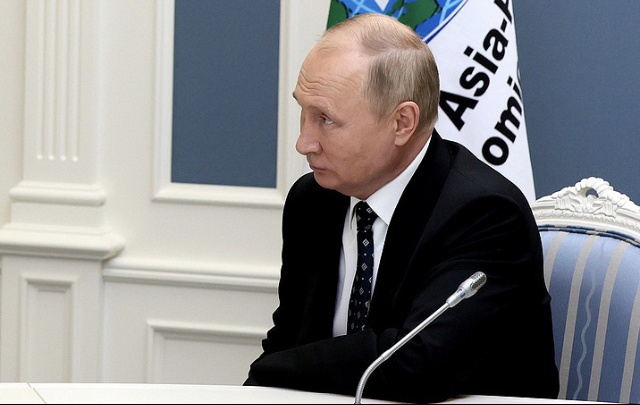 Russia’s president says NATO drills near the country’s border are a dangerous challenge because the bloc is using its strategic air forces. The alliance has boosted its activities across the Mediterranean, with multiple aircraft approaching the Russian border, and vessels performing manoeuvres in the Black Sea.

“Now, the United States and its NATO allies are conducting unscheduled, I want to underline it, unscheduled drills in the waters of the Black Sea. And not only a powerful ship group has been formed, but also aviation, strategic aviation, is being used in the drills,” Putin stated.

“I should say that our Defence Ministry also proposed to hold its own unplanned exercises in the same area. But I believe that this is not appropriate and there is no need to further escalate the situation there”, Putin told the TV channel Russia 24.

The president’s statements come after the US and its allies launched drills near Russian waters. Previously, the United States Sixth Fleet’s flagship USS Mount Whitney enetered the Black Sea, and Russia registerd multiple reconnaissance flights by NATO aircraft near the Crimea.

Moscow has repeatedly slammed NATO’s activities in the Black Sea as a provocation to spur tensions and pursue a policy of containment of Russia. Putin recently called the drills “destabilising” and “dangerous”, while Foreign Minister Sergei Lavrov stressed that by sending their vessels to the area near the Russian border Washington is trying to push coastal countries toward confrontational policies.

In his interview, Putin also dismissed claims that Russia is planning an invasion of Ukraine, noting it is pure “alarmism”, and stressing that his country is not a side in the conflict in Donbass.

He commented on the current situation in the region, saying that Ukraine had officially confirmed it has been using Turkish-made Bayraktar drones in the area – which is strictly prohibited by the Minsk agreements.

Last month, the Ukrainian General Staff claimed that the military had destroyed an enemy howitzer with a guided bomb launched via a Bayraktar strike drone in Donbass. According to Moscow, Kiev is acting in a provocative manner to trigger a response from the local militia and get Russia involved.

The Russian president additionally commented on the migrant crisis that is unfolding along the Belarus-Poland border, stressing once again that Moscow has no ties to that situation.

“Everyone is trying to impose responsibility on us for various reasons – and for no reasons at all,” the president stated.

He stressed that Russian airlines do not transport migrants, and are not responsible for those individuals now on the Poland-Belarus border.

“All the time we have heard that humanitarian issues should be put in first place. Now, at the Poland-Belarus border Polish border guards beating those migrants, firing live rounds above their heads, turning on sirens – day or night – near those places where children and women are in the last months of pregnancy are settled – somehow this does not really fit with the humane ideas that supposedly underlie the entire policy of our western neighbours,” Putin added.

Per Putin, a solution must be found that satisfies Belarus, European countries, including Poland and Germany and other states, since their social welfare systems actually are under pressure.

He expressed hope that direct contacts between the leadership of Belarus and the leaders of major European countries will help solve these problems.

“Frankly speaking, this is the first time I’m hearing of it. I have talked twice to Alexander Grigorievich [Lukashenko] lately, and he never told me that, not even a hint,” he noted.

In theory, Putin stated, Lukashenko can make that decision, but it will break transit contracts and expressed hope that it won’t happen.

“…there is nothing good about it, and I will, of course, talk to him on this issue. Unless he just said it in the heat of the moment,” Putin continued.

Additionally, he mentioned that in 2008 Ukraine used this tactic and blocked Russian gas meant for European users, simply stopping the transit.

The migrant crisis has been escalating over the past weeks, as Poland (along with neighbouring Latvia and Lithuania) has reported an influx of migrants trying to cross into the European Union from Belarus and accused Minsk of facilitating illegal migration.

Belarus denied those accusations, saying it has no funds to stop the migration due to European sanctions.