President Rouhani: Muslim world voices of unity and cooperation should be heard everywhere 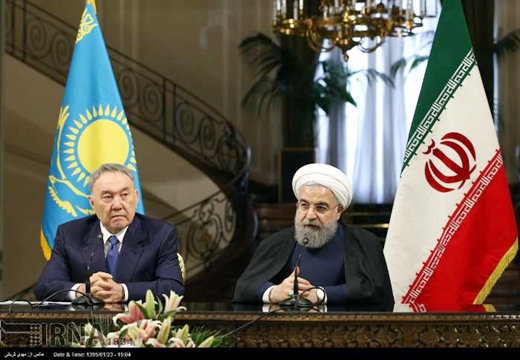 President Hassan Rouhani said that Iran and Kazakhstan believe that the Islamic world's voices of unity and cooperation should be heard everywhere.

He made the remarks in a meeting here on Monday with Kazakh President Nursultan Nazarbayev in reference to the forthcoming OIC summit in Istanbul.
Rouhani said that since the independence of Kazakhstan in 1991, the two countries have expanded and developed their bilateral ties.
The Kazakh government has always been a friend of Iran during the sanctions era and nuclear negotiations with the G5+1 two rounds of which were held in Kazakhstan and during the implementation of JCPOA Kazakhstan by dispatching 60 tons of yellow cake was of great help in the implementation of program.
President Rouhani said that totally 66 documents on cooperation between the two countries were signed by both public and private sectors, which is a turning point in bilateral relations.
Cooperation between Iranian and Kazakh central banks, banking exchanges, issuing visas to Iranian businessmen and support of both governments for private sectors would be an important step towards development of bilateral economic relations.
He added that in private and public meetings with President Nazarbayev agreements were made on development of cooperation in scientific, cultural, technology and communication fields between the two countries and on expansion of agriculture and trade ties.
The two countries also had agreements in such fields as oil, gas, petrochemical, crude oil swap and oil products, he added.
In the sector of transport and communication, railways companies of both countries would establish connection between Iran, Kazakhstan, Turkmenistan and China.
Rouhani added that cooperation in the field of Caspian Sea environment, maritime transport, tourism and Caspian Sea legal regime were among other issues discussed by the two sides.
The two countries also shared similar stance on regional issues such as extremism, terrorism and disputes between various sects and their danger threatening the Islamic world, and the need to find a political solution to Yemen crisis and establish stability in Afghanistan, Iraq and Syria, President Rouhani said.