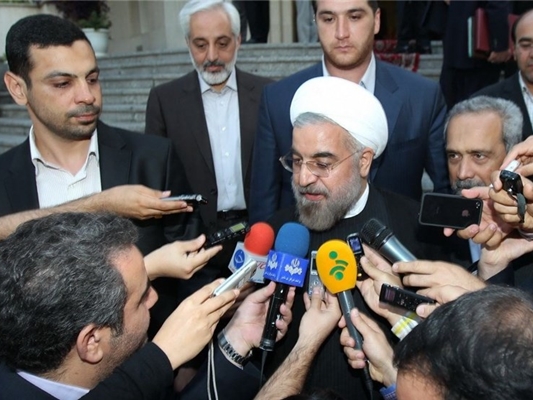 Iranian President Hassan Rouhani praised the growing relations between Tehran and Moscow, saying that the two countries have close cooperation in various areas at regional and international levels.

“Relations between Iran and Russia is moving toward a strategic level and we have good cooperation on different regional and international issues,” President Rouhani told reporters before leaving Tehran’s Mehrabad Airport for the Azeri capital of Baku on Sunday morning.

He further pointed to a trilateral summit between Iran, Russia and Azerbaijan later on Monday, saying that the International North-South Transport Corridor (INSTC) is the main issue to be discussed in the meeting.

The INSTC is a multipurpose route for the transit of goods between Iran, Russia, Europe, India and Central Asia via shipping lines, railroad and land routes.

The Iranian president said the summit between the three countries, which is the first of its kind, will help develop relations between neighbors and enhance stability and security in the region.

President Rouhani and his Russian and Azeri counterparts, Vladimir Putin and Ilham Aliyev, will hold trilateral talks on Monday on various issues, including trilateral cooperation in commerce, energy, telecommunications, environmental issues, fight against terrorism, transportation, and the transit of goods.

During his two-day visit to the Azeri capital, Rouhani is also slated to hold a separate meeting with Putin and exchange views on issues of mutual interest.

A number of ministers and high ranking officials are to accompany President Rouhani in the official visit.

In that gathering, Iran’s Mohammad Javad Zarif, Russia’s Sergey Lavrov and Azerbaijan’s Elmar Mammadyarov discussed a range of issues, including ways to settle conflicts in the Nagorno-Karabakh region.