Politics Must Be ‘A Tool for Common Good’: Rouhani 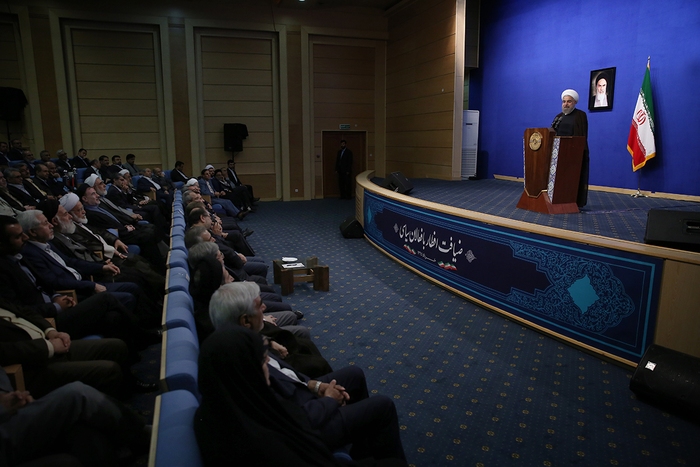 President Rouhani told a meeting of political figures that all political parties should respect the 'rules of the game' in terms of their political activities.

On Monday evening, June 20, Hassan Rouhani sat down to a fast-breaking meal with a group of political activists which included members from across the whole political spectrum, including both Principalists and Reformists, to celebrate the occasion of the holy month of Ramadan.

Rouhani believed that all should observe the rules of the game in political activity as prerequisite of political ethics. “Magnanimity of spirit should be a guiding principle in any political failure of one’s own party and/or success of the rival political party; however, such spirit has been difficult to find in the current political terrain,” he said. “Our neighbours welcome political rifts and conflict within the country, and they would benefit the most from such confrontations. Only [by being] united and consolidated domestically would we succeed in bringing about a healthy political atmosphere, thus converging all forces in a constructive path to rebuild the country.”

Rouhani criticized the commonly believed concept of politics as “seizing political power by whatsoever means,” favouring a more benign concept of attending to the common good of the political unit through addressing the problems of the nation and advancing society to the terra firma of happiness. “About criticism, I believe to criticize is a collective right; however, genuine criticism is very different from deliberately wounding the government with an objective no less malign than to weaken the subject of criticism. I invite all political parties to attend the greater issues of the country’s issues on the 40th anniversary of the Revolution, along with [creating] a breath-taking national celebration.”

Rouhani said that he believed that his Cabinet was nonpartisan. “We have waged efforts to bring together representatives from all political parties in the Cabinet to serve the country, setting aside all partisan sentiments. I would advocate monthly meetings of this sort to address the major problems of the country and to agree on certain solutions,” he proposed.

The President also hoped that the single-digit inflation figures, along with modest economic growth figures, would provide examples of future successes which the country would expect to see achieved through unity and cooperation.