Photo of Hugging Twins Brings Tears to Millions of Eyes 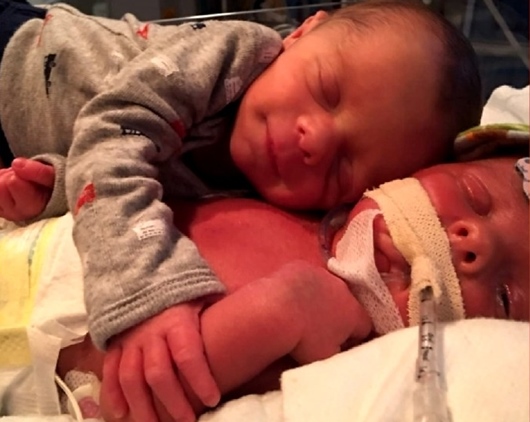 A photo of twin brothers hugging has gone viral, but the story behind it has now turned heart-breaking.

The two boys were born August 18 in Gainesville, Fla.

But while Mason was born healthy, his brother Hawk was diagnosed with a rare congenital condition called CDH.

The boys’ parents chronicled Hawk’s journey on Facebook — and posted the sweet picture of both brothers meeting again outside of the womb with the caption.

Mason Buchmeyer hugs his brother, and smiles, capturing millions of hearts and “likes.”

His mother, a nurse from Fort Pierce, says it was actually Mason who needed calming down that night.

“He was actually getting really fussy,” Brandy Guettler said, “And the nurse said why don’t you try laying him down next to Hawk. I said ‘Can you do that?’ So we laid him there and all of the sudden as soon as he felt Hawk, he reached his arm out and grabbed him and just started to smile. The two of them knew they were there for each other.”

She took a picture and Mason and his brother Hawk, on a ventilator, went viral.

“We posted the picture for people to see how they were doing since we were so far away at Shands in Gainesville,” Tommy Buchmeyer, Hawk and Mason’s Father said, “Every day the numbers grow. 5.6 million people have seen it. 24,000 shares. 105,000 likes.”

“We didn’t expect it to take off the way it has. We have been contacted from Ireland, Scotland, Ukraine, United Kingdom, people from all over,” Guettler said.

And except for the first few shares, most were just in love with the image, and had no idea the story behind the picture. Well, now you will.

According to a report by CBS, as covered by Al Alam, that tiny twin, Hawk, who gave his brother comfort, he himself was fighting for his life. But a few weeks later Hawk succumbed to the condition.

His parents announced his passing on Facebook saying they will always treasure the photo and the short time they had with their little boy.