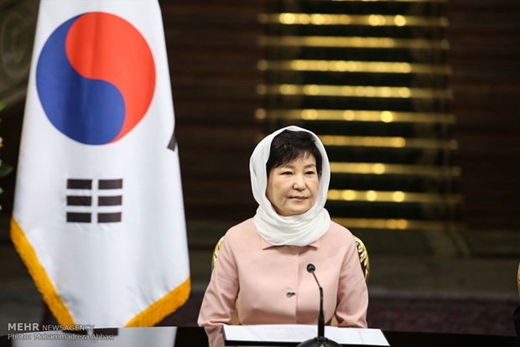 South Korean President Park Geun-hye said South Korea hopes that North Korea will follow in the footsteps of Iran in curbing its nuclear activities and joining the international community.

Making remarks during a joint news conference with Iran’s President Hassan Rouhani, Park Geun-hye said on Monday that she called for Iran’s cooperation in the faithful enforcement of UN sanctions resolutions against North Korea that were imposed after Pyongyang carried out its fourth nuclear test and a long-range rocket launch earlier this year.

Park and Rouhani observed the signing of 20 out of 66 MOUs after their meeting, the first meeting between the leaders of the two countries since the establishment of bilateral diplomatic relations in 1962.

Iran, which has 80 million people, has emerged as a promising market as it is pushing to rebuild an economy and modernize railways and other major infrastructure following the lifting of international sanctions earlier this year.

The UN lifted sanctions on Iran in a follow-up to a nuclear deal reached with the United States and five world powers over Tehran’s disputed nuclear program.

More than 230 South Korean business executives and leaders have accompanied the president on her state visit to the Islamic Republic to explore new business opportunities.

A South Korean company signed a preliminary deal with its Iranian counterpart worth $5.3bn to build a 541km-long track bed for a railway.

Cheong Wa Dae said the preliminary deal could boost the chance of inking a formal deal further down the line.

The MOUs also include a $10bn project by a South Korean consortium to build facilities to produce heavy oil in the southern Iranian port city of Bandar Jask.