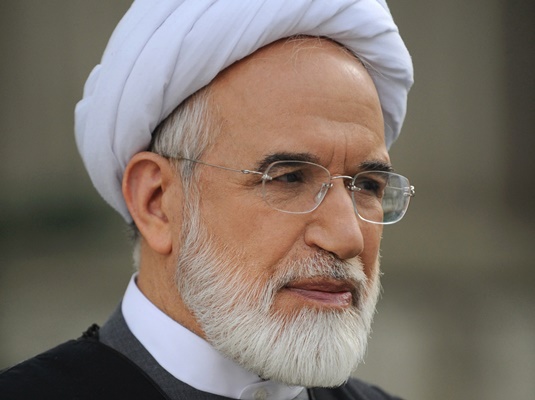 Iranian newspapers on Saturday widely covered the hunger strike of Mahdi Karroubi, one of the two Iran-based opposition leaders, who finally resumed eating after President Rouhani gave positive responses to his demands.

Karroubi, who has been under house arrest in the past six years for his role in the unrest following the 2009 presidential election in Iran, stopped eating and drinking on Wednesday morning and was taken to hospital on Thursday due to high blood pressure.

The 79-year-old reformist cleric reportedly declared he will not resume eating until intelligence agents are removed from his home, and a public trial is scheduled for him.

After an order by President Hassan Rouhani, Health Minister Hassan Qazizadeh Hashemi and a deputy intelligence minister met the opposition leader on Thursday and secured promises that convinced him to end the hunger strike.

Surprisingly, the issue was widely covered in the front pages of both conservative and reformist newspapers on Saturday.

The government-run Iran newspaper referred to the end of Karroubi’s hunger strike after Rouhani’s orders.

The Hamdeli newspaper also reported the hope expressed by various religious and political figures about the end of the opposition leaders’ house arrest.

The Setareh Sobh newspaper quoted the First Vice-Speaker of Iran’s Parliament Massoud Pezeshkian as saying that the continuation of the opposition leaders’ house arrest will not be in Iran’s interest.

It also referred to the Parliament’s Second Vice-Speaker Ali Motahari’s remarks, where he urged the country’s officials to prepare the grounds for Karroubi’s trial.

Pezeshkian’s remarks were also covered by Bahar, which used the headline “Issue of House Arrest Can Be Resolved through Interaction between Leaders.”

Bahar also dedicated its editorial to the issue of the opposition leaders’ house arrest, saying there is a legal solution to the problem.

Meanwhile, the conservative paper Javan criticized the fuss made about the hunger strike, and described it as a small one-day strike. It also released an editorial on the issue titled ‘Ending House Arrest: One Way, Two Results’, arguing that the end of house arrest will not mean the release of the two opposition figures; it rather will lead to their trial and a possible death penalty for them.

Javan advised reformists not to drag the Establishment into the execution of the two figures, and let them stay under the house arrest.

The other major conservative paper Kayhan also published Hossein Shariatmadari’s interview with Fars about Karroubi’s hunger strike. In this interview, Shariatmadari, the chief of Kayhan, described the strike as a plot hatched to fabricate documents for anti-Iran human rights sanctions imposed by the US.

He further described Karroubi as an individual with revolutionary backgrounds, and accused reformists of taking advantage of him to protect the other opposition leader Mir-Hossein Mousavi and the former president Seyyed Mohammad Khatami during the post-election ‘sedition’ in 2009.