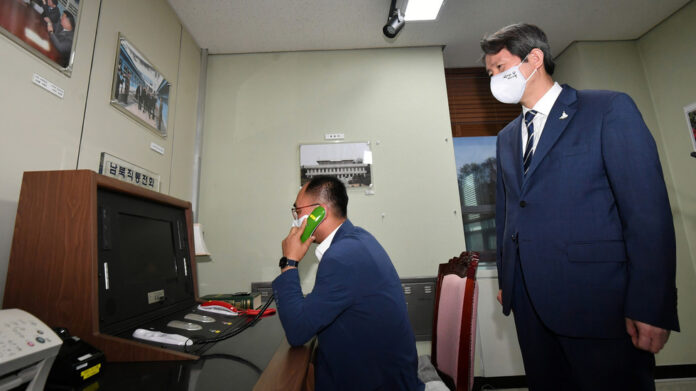 The Democratic People’s Republic of Korea (DPRK) decided to restore all the north-south communication lines starting from 9:00 a.m. on Monday, according to the official Korean Central News Agency (KCNA).

The report said the decision was announced to follow the promise made by Kim in a speech last Thursday in which he expressed the intention of restoring the cut-off north-south communication lines as part of the effort to realize the expectation and desire of the entire nation who want the north-south relations to be restored.

“The South Korean authorities should make positive efforts to put the north-south ties on a right track and settle the important tasks which must be prioritized to open up the bright prospect in the future, bearing deep in mind the meaning of the restoration of communication lines,” the report added.

Inter-Korean relations have remained cold since the summit between the DPRK and the United States reached no deal in early 2019. The inter-Korean hotlines were briefly back in operation in late July, but the DPRK began refusing Seoul’s regular calls again two weeks later in protest against the joint military drills by South Korea and the United States.

The South Korean government expressed hope for the resumption of inter-Korean dialogue following the restoration of communication lines, the unification ministry said Monday.

The government believes that the connection of the inter-Korean communication lines has laid the foundation for stabilizing the situation on the Korean Peninsula and restoring inter-Korean relations, the ministry announced in a statement sent to reporters.

Through the stable management of the communication lines, the government hopes to resume dialogue as soon as possible, begin and advance substantive discussions on improving inter-Korean relations and making peace take root on the Korean Peninsula, it added.