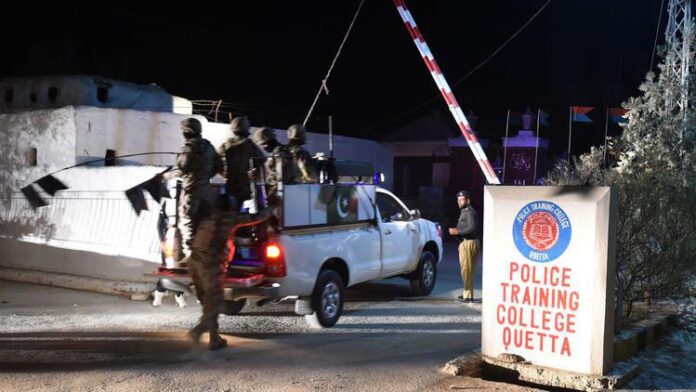 Dozens of people were killed and wounded in an extremist attack on a police training centre in Pakistan’s Quetta.

At least 60 people were killed when three militants armed with automatic rifles and grenades attacked a police training centre in the volatile southwestern Pakistani region of Baluchistan, security and rescue officials said Tuesday.

More than 120 people were injured. It was the second major attack in the provincial capital, Quetta, since August.

Security officials said militants shot a guard at the main entrance to the Baluchistan Police College about 9:30 p.m. Monday before entering the compound and taking aim at the dormitories where hundreds of cadets are housed.

Cadets fled the explosions by scaling the walls of the compound, many of them sustaining injuries.

The death toll by Tuesday morning had surpassed 60. Nearly all the dead were cadets, according to a rescue official who requested anonymity because he was not authorized to speak to the media.

About 700 cadets were usually housed at the facility, about 12 miles outside Quetta, although the numbers were slightly lower Monday because exams had recently concluded, Baluchistan’s home minister, Mir Sarfaraz Ahmad Bugti, told reporters.

“A complete search operation of the sprawling academy has been conducted and it is declared clear,” Bugti said after the siege, which lasted about four hours. He said that three militants had carried out the attack, although previous reports suggested the number was as high as six.

Several cadets were injured as they scaled a 10-foot perimeter wall to escape. Survivors told reporters outside the academy that the assailants’ faces were obscured by masks or scarves.

“They were carrying Kalashnikovs and firing indiscriminately on the cadets inside hostels,” one cadet said.

The bodies of slain cadets were transported to police headquarters in Quetta for a collective funeral prayer, after which they would be dispatched to their homes in different parts of the province, police officials said.

Baluchistan, a remote province along the Afghan border, is home to a long-running insurgency by ethnic separatists seeking to break away from the Pakistani state.

It has been the site of several recent attacks. The most recent came in August, when a splinter group of the Pakistani Taliban claimed responsibility for a suicide bombing that killed 64 people at a Quetta hospital, mostly lawyers who had gathered to mourn a slain colleague.