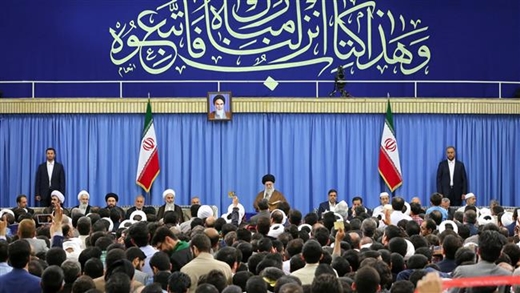 The Leader of the Islamic Revolution, Ayatollah Seyyed Ali Khamenei, says certain Muslim governments have been betraying their people by helping the US implement its policies in the region.

“Some Islamic governments are betraying their people and the Islamic Ummah, and paving the way for American influence,” the Leader told participants at an international Qur’an competition in Tehran on Wednesday May 18.

“Certain (governments) in the Islamic world, instead of clinging to the Qur’an, are clinging to Taghut,” Ayatollah Khamenei said, using the Arabic word for idolatry or the worship of anything except Allah.

“America is a major Taghut and the Great Satan,” the Leader added.

“Those who are implementing American policy in the region are adhering to Taghut and do not have disbelief in Taghut,” Ayatollah Khamenei added.

The Leader also said Takfiri terrorists and Wahabbi affiliates are doing the enemy’s bidding by “consigning the Palestinian issue to oblivion” through their reign of terror in the Middle East.

“Satanic powers are scared of Islam and the 1.5bn-strong Muslim community,” the Leader said, adding tremendous sums of money are being spent to harm Islam and Muslims but that “We have no doubt victory belongs to Islam.”