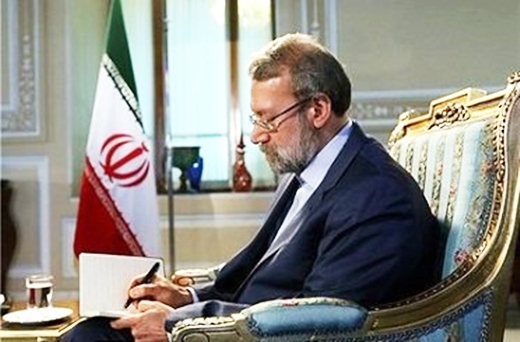 Ali Larijani issued a message congratulating the election of Hadiyeh al-Abbas as the first female speaker in history of the Arab country’s legislature, marking a historic event in the war-stricken country.

The full text of Larijani’s congratulatory message is as follows:

Speaker of the People’s Assembly of Syria,

I deeply feel obliged to express my own as well as other Iranian MPs’ sincere congratulations on the occasion of your election as the Parliament Speaker of the People’s Assembly of the Syrian Arab Republic.

Hereby, I hope that in the course of your responsibility, friendly relations and parliamentary cooperation between the two brotherly countries of the Islamic Republic of Iran and the Syrian Arab Republic will be further extended at various regional and international levels.

Meanwhile, I would like to emphasize that Iran’s strategy is to develop close and comprehensive multilateral ties with the Syrian people and government in order to achieve stability, peace and security in the region.

Seizing the opportunity, I also ask the Almighty God for your heath and success as well as for destruction of terrorist-Takfiri groups and victory of the government and nation of the friend and brother country of Syrian Arab Republic.

Speaker of the Parliament of the Islamic Republic of Iran