A Kiss that May Outrage Saudis, Escalate Qatar Crisis (+Video) 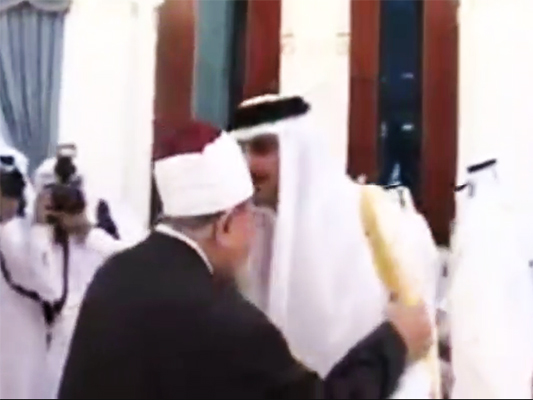 The Qatari emir has recently greeted a senior Egyptian cleric and kissed his turban in a move that can further unleash the Saudis’ wrath and deepen the ongoing crisis in the Middle East.

A video that has gone viral on social media shows Qatari Emir Sheikh Tamim bin Hamad al-Thani meeting and greeting the Qatar-based Egyptian cleric, Yusuf al-Qaradawi, in a challenging move in his palace on the occasion of Eid al-Fitr.

In this video, the Qatari emir is shown kissing Qaradawi’s turban in a move that is highly likely to make the members of the Persian Gulf Cooperation Council furious as they have put al-Qaradawi’s name, along with those of dozens of other individuals and organisations, on the list of people with alleged links to Qatar as terrorists. Qaradawi is also the spiritual leader of Egypt’s now-banned Muslim Brotherhood movement.

According to the video, the Qatari emir and al-Qaradawi had exchanged a few friendly words before the former kissed the latter’s turban.

A joint statement by Saudi Arabia, Bahrain, Egypt and the UAE has placed 59 individuals and 12 organisations – either Qatar-based or funded by Qatar – on a “terror list”.

These countries have recently relayed to Doha officials via mediators from Kuwait a list of demands as their preconditions for normalising ties with Qatar.

One of the conditions set for Qatar is to sever its ties, as claimed by the Persian Gulf Cooperation Council members, with all “terrorist, ideological and sectarian organizations,” including the ISIS, the Muslim Brotherhood, Al-Qaeda and Hezbollah.

Prior to this, a number of other Arab leaders, including the UAE’s Vice President, Prime Minister and Ruler of Dubai, had kissed al-Qaradawi’s forehead when meeting him. Nevertheless, following the souring of the relations between the GCC member states and Qatar, al-Qaradawi has become a red-line.

The Qatari emir’s recent kiss on the cleric’s turban can further worsen the ongoing crisis in the Middle East.