‘Khashoggi Was Going to Disclose Saudi Use of Chemicals in Yemen’ 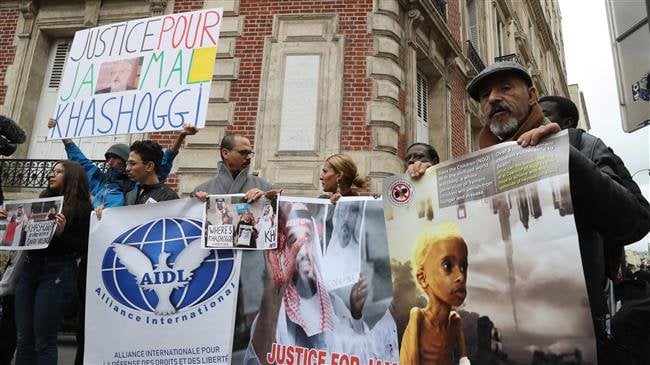 Dissident Saudi journalist, Jamal Khashoggi, who was recently murdered at the Saudi consulate in Istanbul, was about to disclose details of Saudi Arabia’s use of banned chemical weapons in its imposed war on Yemen days before he was killed, a report says.

British Sunday Express weekly reported that a close friend of Khashoggi, speaking on condition of anonymity, had told it on Saturday night that he was about to obtain “documentary evidence” from his murdered friend proving claims that Riyadh had used banned chemical weapons in its brutal aggression against Yemen.

“He didn’t really want to reply, but eventually he told me he was getting proof that Saudi Arabia had used chemical weapons. He said he hoped he be getting documentary evidence,” Khashoggi’s fried further revealed, adding, “All I can tell you is that the next thing I heard, he was missing.”

Leading a coalition of its allies, including the United Arab Emirates, Morocco, and Sudan, Saudi Arabia invaded Yemen in March 2015 in an attempt to reinstall a former Riyadh-friendly regime, which had resigned amid popular discontent, and to crush the country’s popular Houthi Ansarullah movement, which has played a significant role, alongside the Yemeni army, in defending the nation and has been running state affairs in the absence of an effective government.

The aggression initially consisted of a bombing campaign, but was later coupled with a naval blockade and the deployment of ground forces to Yemen. More than 15,000 Yemenis have so far been killed and thousands more wounded.

More than three and a half years into that war, Saudi Arabia has achieved neither of its objectives. This is while it had declared at the start of the invasion that the war would take no more than a couple of weeks.

Since the onset of that war, Riyadh has been accused of using banned chemical weapons against the Yemeni soldiers defending their country against the Saudi-led aggression, with reports of using US-supplied white phosphorus munitions that can maim and kill by burning to the bone.

Khashoggi’s friend did not tell the Sunday Express whether the white phosphorus was one of the chemicals Saudis used against Yemenis, but the weekly speculated that it was “more likely” that the murdered journo was referring to phosphorous.

Last month, it was claimed that Saudi Arabia had been using white phosphorous munitions supplied by the US against soldiers and even civilians in Yemen, the weekly added.

“If Khashoggi did, in fact, have proof that Saudi Arabia was deliberately misusing phosphorous for this purpose, it would be highly embarrassing for the regime and provides the nearest motive yet as to why Riyadh may have acted when they did against him,” the Sunday Express quoted chemical warfare expert, Col. Hamish de Bretton-Gordon, as saying.

Khashoggi, 59, an outspoken critic of the Saudi government, had been living in self-imposed exile in the United States since 2017, when Saudi authorities launched a massive crackdown on dissent. He was seeking to secure documentation for his forthcoming marriage when he entered the Saudi consulate in Istanbul on October 2, but never came out despite Riyadh’s initial claim that he exited the mission less than an hour after entering.

The kingdom, however, later admitted that the journo had been murdered in the consulate after diplomatic pressure grew tremendously on Riyadh to give an account on the mysterious fate of its national. However, it said that it did not know the whereabouts of the journo’s body, which is widely believed to be dismembered.

The British weekly further cited “highly-placed” intelligence source, speaking on condition of anonymity that a “member of the royal circle” of Saudi Arabia had ordered to kidnap the journalist and take him back to the Arab kingdom. But it is not clear whether the “member” had been Saudi Crown Prince Mohammed bin Salman. “Whether he was not the original issuer we cannot say,” they added.

Though it was commanded that Khashoggi should be abducted and taken back to Riyadh, it “left the door open for alternative remedies,” should the journo proved to be troublesome, sources added.

Last week, Saudi Arabia’s Attorney General confirmed “the suspects in the incident had committed their act with a premeditated intention,” in sharp contrast to initial official explanations that Khashoggi had been killed after a fight broke out in the diplomatic mission.

Those suspects, the weekly added, were within a 15-strong hit squad sent to Turkey and included serving members of Saudi General Intelligence Presidency (GIP).

MI6 knew about the plan

Separately, the highly-placed source has confirmed that Britain’s MI6 had warned its Saudi Arabian counterparts to cancel the mission, though this request was ignored.

“On October 1, we became aware of the movement of a group, which included members of the GIP to Istanbul, and it was pretty clear what their aim was,” the source said, adding, “Through channels we warned that this was not a good idea. Subsequent events showed that our warning was ignored.”