Khamenei: JCPOA Breaches by US Must Be Publicized by Poets 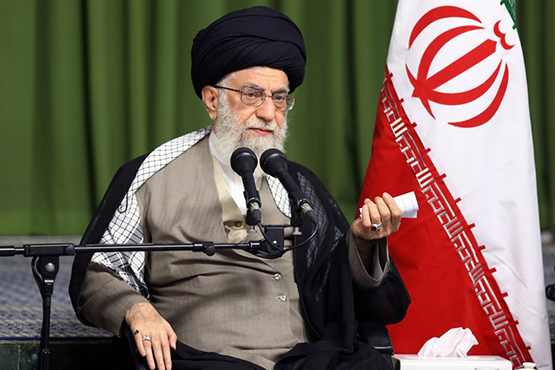 Leader of the Islamic Revolution Ayatollah Seyyed Ali Khamenei called for measures, both by politicians and artists, to let the public know about America’s treasonable conduct in terms of honouring its commitments under the JCPOA, a nuclear deal between Iran and six countries.

A group of cultural figures, professors of Persian literature and poetry, young and veteran Iranian poets, as well as poets from India, Pakistan, and Afghanistan all had a meeting with Imam Khamenei in Tehran on Monday evening, June 20.

One of the possible fields for writing poems at present is “Broadcasting the Americans’ breach of the JCPOA,” the Leader stressed at the meeting, adding, “In addition to politicians, artists, and poets in particular, should let the public know about these facts.”

The Leader was referring to Washington’s lack of commitment to the Joint Comprehensive Plan of Action (JCPOA), a lasting nuclear deal between Tehran and the Group 5+1 (Russia, China, the US, Britain, France and Germany).

Elsewhere at the gathering, Ayatollah Khamenei described poets as a valuable asset to the country, and highlighted the significant role they can play in critical conditions.

Poets should take action and help the country at critical junctures, when the nation needs help in dealing with political and cultural issues and in confrontation with external enemies, the Leader underlined.

“We are now on the battlefield of soft war, political, cultural and security war, and countering infiltration, while thought and willpower are fighting on this field, and one of the major and most influential tools in this battle is poetry,” the Leader explained.