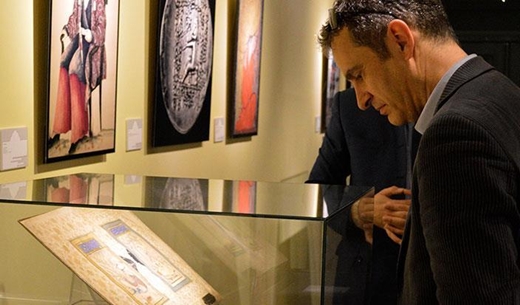 Amos Bertolacci from Scuola Normale Superiore University visited the Malek National Library and Museum, and studied the oldest version of Shifa’, the immortal work of Avicenna.

Amos Bertolacci, Professor of Islamic philosophy in the Italian Scuola Normale Superiore University, was invited by Dr. Ali Akbar Velayati to view the manuscripts of the Malek National Library and Museum. He said, “I have come to Iran to research a book called ‘Towards a Critical Edition of the Metaphysics (Ilahiyyat of Kitab al-Shifa’) of Avicenna (Ibn Sina) into English’, as well as investigating the possibilities of expanding the relations and cultural attachments with Iranian cultural, scientific, and literary centers and institutions.”

“Avicenna connected Greek philosophy to Western Latin in the European Middle Ages. This great Iranian philosopher is very significant in this regard.”

“We know that there are more than 200 versions of his Metaphysics, most of which exist in Iran. One of these is the oldest version, which dates back to 509 A.H./1115 A.D. and is being preserved in the Malek National Library and Museum.”

The professor, who is visiting Iran for the first time, said “In this trip, I visited the Malek National Library and Museum twice. In future, I will work with the Library of the Majlis [Parliamentary Library] to view its manuscripts as well. The Treasury of Manuscripts in the Malek National Library and Museum is very valuable and peerless. The services in this treasury are also rendered at the highest level, with professional expertise.”