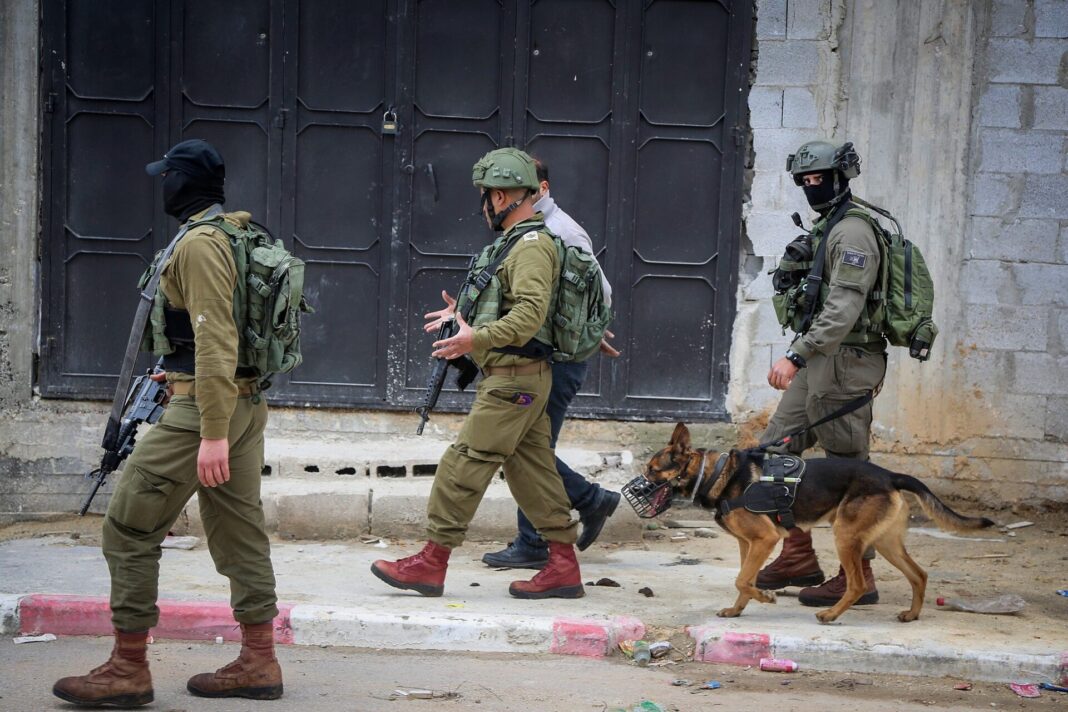 The Palestinian Islamic Jihad movement promised they will repel Israeli troops if they enter the Jenin refugee camp in search of the six Palestinian prisoners who escaped from an Israeli high-security prison.

Early on Wednesday, Israeli soldiers with dogs scoured gaps in Israel’s separation wall near the Palestinian town of Yaabad near Jenin, while reconnaissance aircraft flew above.

Tensions were high in the Jenin area as gunfire reverberated throughout the camp on Tuesday night and Palestinian fighters promised to act if Israeli forces harmed the escapees or other Palestinian prisoners in Israeli jails.

It is unclear where the six Palestinians are hiding. The men were believed to have been headed for Jenin, where their families are based, and where the internationally recognized Palestinian Authority wields little control.

Hundreds of Israeli security forces and intelligence agents on Wednesday continued the search for the six Palestinian prisoners who tunneled out of Gilboa jail on Monday.

Meanwhile, dozens of checkpoints were erected between the West Bank and Israel, as Israeli authorities feared armed Palestinians might attack Israeli settlers in the occupied West Bank or within Israel.

Jamal Zubeidi, 65, the uncle of one of the prisoners, said the family expected Israeli soldiers to invade the camp at any time.

“We don’t know when they will come but we expect them any time and we are prepared,” Zubeidi told Al-Jazeera, adding, “Our family has suffered from the Israeli occupation for many years.”

Despite the tense atmosphere at the Jenin refugee camp, many young men cheered the escape of the six prisoners, as well as the possibility of standing up to Israeli forces if they enter the camp.

“The guys are not scared. They are fighting for their rights,” Noor Saadi, 27, who previously spent two years in an Israeli jail, told Al-Jazeera.

Since the stunning prisoner escape, the Israel Prison Service has broken up groups of Islamic Jihad members in various prisons.

It also evacuated 90 Palestinian prisoners out of a total of 360 held in Gilboa, as the facility undergoes an intensive inspection.

Israel announced apprehending the six men was a matter of urgency, not only to prevent potential attacks, but also because their escape emboldened gunmen from various factions to confront the Israeli militarily.

Three Palestinians from the village of Noura in northern Israel were arrested on Tuesday on suspicion of aiding the prisoners in their escape.

According to Israel, one of the escapees was captured by surveillance cameras in the town’s mosque.

Al-Jazeera witnessed Israeli troops invading the village of Arrabunah, southwest of Jenin, on Tuesday night where soldiers confiscated footage from surveillance cameras before groups of young Palestinians threw stones at them. Shortly afterwards, the soldiers withdrew.

Earlier on Tuesday, Israeli soldiers positioned themselves on the hills overlooking the village of Deir Ghazzalah, which lies near the Israeli separation wall between the northern West Bank and Israel. A surveillance drone hovered over the village at night.

In recent weeks, there have been numerous clashes between Israelis and Palestinians in the northern occupied West Bank, mainly in Jenin and Beita.

Two weeks ago, at least four Palestinian men were shot dead during confrontations with the Israeli Army in the Jenin refugee camp during a raid by Israeli special forces to arrest a wanted Palestinian man.

Witnesses stated a group of Palestinians engaged in clashes with members from the Israeli police’s Musta’ribeen – an undercover unit made up of Israelis disguised as Palestinians.