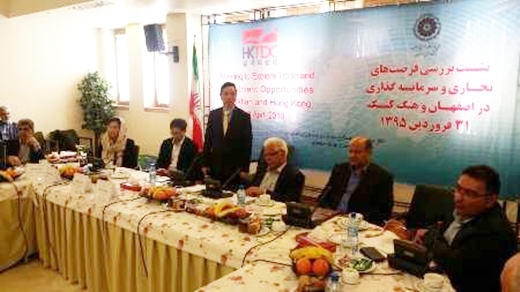 Members of Isfahan Chamber of Commerce, Industry, Mine and Agriculture met with a group of businessmen from Hong Kong on Tuesday evening to discuss venues for bilateral trade.

He emphasized that the trip aims at getting information to develop economic ties.

Later at the meeting, Director General of Customs Office of Isfahan Province Assadoallah Ahmadi Vanhari said that exports Isfahan’s customs were about $1.3b last year.

Hong Kong’s trade and economic delegation, who had previously made visits to Iranian provinces of Tehran and Mashhad, is active in different fields such as clothing, textiles, food and beverages, construction and tourism, tourism industry management, electronic trade, leather, fashion, construction of energy storage facilities, sewage system, packaging and banking.

Over 80% of Iran’s exports to Hong Kong are related to dried fruits.