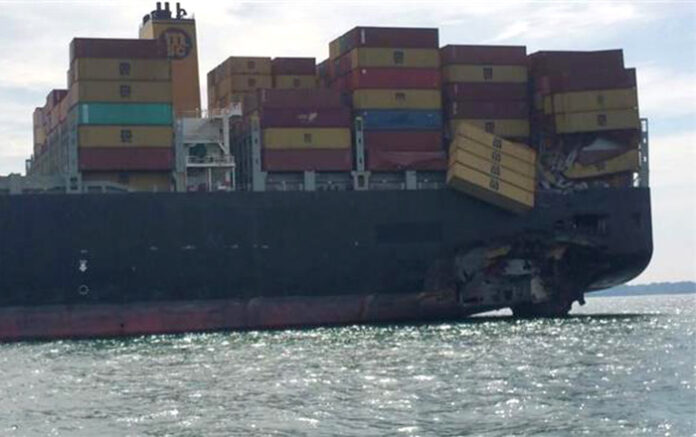 A large container ship has collided with an Iranian supertanker in the busy Singapore Strait, causing damage to both vessels, but no injuries or oil pollution, the Maritime and Port Authority of Singapore (MPA) says.

MSC Alexandra said that six empty container boxes fell into the sea and four others fell onto the deck of Dream II.

The MPA reported that before the incident, its Port Operations Control Centre provided traffic information and alerted both ships of the risk of collision.

Immediately after the collision, the MPA issued navigation broadcast to warn ships about the presence of floating containers in the site, and deployed survey and salvage teams to recover the containers, it added.

“We are… extremely relieved to hear that there has been no loss of life, or pollution caused despite the significant damage to the hull of MSC Alexandra,” Yock Juee Tan, the managing director of MSC Asia, said in a statement.

“We are now continuing to work closely with the authorities and salvage teams to ensure containers are safely discharged.”

Both Dream II and MSC Alexandra are in a stable condition and are now safely anchored in Singapore.

Tehran has been seeking to ramp up oil exports following the implementation of last year’s nuclear agreement between Iran and the P5+1 group of countries and the removal of sanctions on January 16.

The lifting of international restrictions against Iran has enabled the NITC to operate more freely and increase shipments of oil cargoes to its top buyers in Asia including China.

Iran and the five permanent members of the United Nations Security Council – the United States, Britain, France, China and Russia – plus Germany clinched the nuclear agreement, known as the Joint Comprehensive Plan of Action (JCPOA), on July 14, 2015.

Under the agreement, all nuclear-related sanctions imposed on Iran by the European Union, the Security Council and the US would be lifted. Iran has, in return, put some limitations on its nuclear activities.