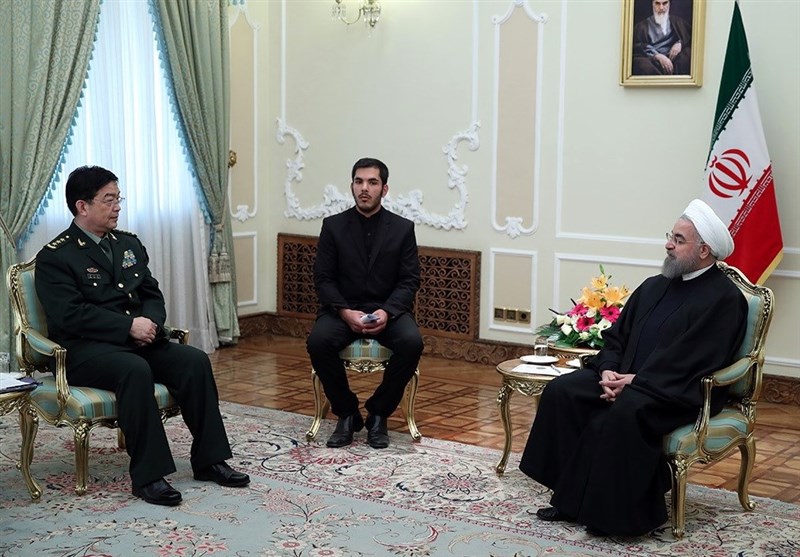 One could not make a distinction between security in different parts of Asia, be it the Persian Gulf, Indian Ocean or South China Sea, the Iranian president said at a meeting with China’s Defense Minister General Chang Wanquan in Tehran on Tuesday.

“We need to preserve Asia’s security together, and today, the Islamic Republic of Iran has also a very significant role in ensuring global security and stability,” President Rouhani added.

He also referred to terrorism and foreign interference in the internal affairs of other countries as two major threats in the contemporary era.

The president further voiced Iran’s determination to boost cooperation with China -a great Asian country and an age-old friend of Iran- in all fields, including defense.

Highlighting the role of reciprocal visits by Iranian and Chinese military officials in promoting closer mutual cooperation, President Rouhani called for the full implementation of agreements with China.

For his part, the visiting general hailed Iran as the region’s leading power, voicing China’s resolve to keep working with Iran for the sake of regional security and stability.

Wanquan also emphasized the significance of collaboration between Tehran and Beijing in the fight against terrorism.

On Monday, the Chinese defense minister and his Iranian counterpart Brigadier General Hossein Dehqan signed an agreement on closer defense and military cooperation between Tehran and Beijing, sharing military experience, particularly in training, as well as combatting against terrorism and causes of regional insecurity.