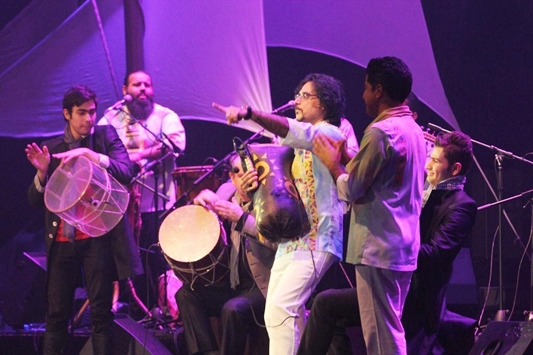 Concert halls in Tehran and several other Iranian cities will be brightened up over the coming days by live performances from various musicians, including Alireza Qorbani, Salar Aqili, Mohsen Yeganeh and Lily Afshar.

July performances include a concert by composer Mahyar Alizadeh and vocalist Alireza Qorbani who will perform selections from their album “Fairylike Girl” at Tehran’s Vahdat Hall.

Several other performances are also scheduled to take place in Vahdat Hall including concerts by Nariman Ensemble, exclusively for women, and the Sur Ensemble with vocalist Hessameddin Seraj.

Gil and Amard, a major ensemble playing Gilaki folk music, and Lian, an Iranian band from the southern city of Bushehr, will also give performances at Vahdat Hall.

Vocalist Salar Aqili is scheduled to perform in Kerman on July 14.

Pop singers Omid Hajili, Majid Kharratha, Mehdi Moqaddam, and Rouzbeh Nematollahi will give concerts in the city of Noor, while Mohsen Yeganeh will perform in Chalus and Omid Hajili in Ramsar.

The concerts will continue in August with a performance by the US-based Iranian guitarist Lily Afshar in the Niavaran Cultural Centre.

The Niavaran Cultural Centre will also host several other performances including a concert by the Rasch Ensemble, during which the group will perform pieces of Latin music, and a quartet by Shahrdad Rohani, the new conductor of the Tehran Symphony Orchestra.

Several other concerts have also been scheduled in other cities such as Kermanshah, Mahabad, Khorramabad and Rasht.