“Iranian Women Do Not Give Up Easily”: Tech Girl Roxanne Varza 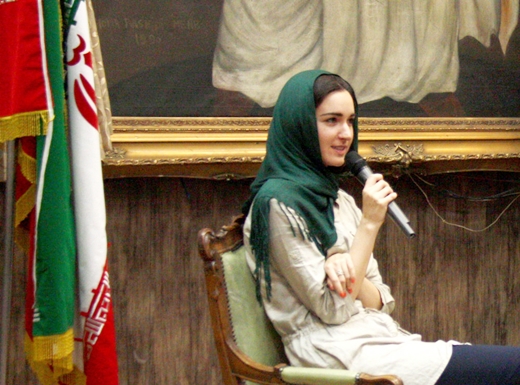 31-year-old Roxanne Varza placed 6th in Business Insider’s Top 30 Women under 30 in Tech back in 2013. She is trilingual, and holds degrees from UCLA, Sciences Po Paris and the London School of Economics. She is also the co-organizer of the Failcon Paris conference. More recently, she co-founded Tech.eu, a European technology media outlet. Here, she speaks to Tehran Times about her life, career, and Iranian women.

Varza was born to an Iranian family in the U.S. Prior to founding TechCrunch, she worked for the French government’s foreign direct investment agency, helping fast-growing startups develop their activities.

She has spoken, moderated, mentored and judged numerous startup events and programs throughout Europe and also helps European startups with content and communications. She is also an epilepsy advocate.

“Iranian women have a very good spirit. I love it. I have heard a lot about the difficulties and challenges that they have, but they still have a very strong spirit,” Varza said.

“It was a funny feeling when I came to know that I was among the top thirties. I think it is always very nice to be on this list but I think that there are so many women around the world that should be recognized”, she explained.

“Technology is both for men and women. When we started Girls in Tech, we were two people. I was a journalist at the time and I was writing about technology startups and all the startups that I met were founded by men and I was looking for some new stories. So we started this group to see who were the women working in technology, and we actually discovered that there were a lot, but they didn’t go to other technology events.”

“This was the main reason that we started Girls in Tech, and today we do a lot of different programs to help encourage more women to join technology,” she said, adding that the percentage of women in technology is very low, usually around 30% in Western Europe and the U.S., while noting that in Iran it’s a different story.

“For girls who want to work on startups, I usually say you should start your own project. It doesn’t have to be your own start-up, but a start-up project,” Varza said.

“Start-ups are not specific to women, but I have definitely been very excited about getting more women into technology and encouraging younger generations to come into technology.”

“For me, beginning to work in start-ups happened by accident. I worked for a French government agency, working with American startups to bring them to France. So I tried to open offices for Facebook, Twitter, and other companies in France and that was when I discovered actually I loved startups.”

“I love people who are creative, very optimistic and very intelligent. So I love entrepreneurs and that is how I got involved in startups. The second step I took was when I started a blog and my blog let me meet a lot of people, go to lots of events, and develop my network.”

“The talent of women in technology is actually very good. When people ask me what’s the difference between a man and woman, I always say I don’t know. I haven’t been a man! But I think when we are looking at the talent, it is exactly the same. Women are actually matching men in everything,” she stressed.

“I think it is a very good time to be a woman entrepreneur right now,” she said. “I think that even though women’s percentage in technology is very low, it’s an advantage. Having been somebody who is rare is definitely something that people remember and people notice, which actually helps businesses a lot. The second thing is that right now we are seeing a lot of big corporations, Microsoft, Google, IBM, all big companies that want to work more with women.”

“I think they are looking at being diverse. They don’t want to hire a ton of people with the same background, because that’s not where innovation comes from. So I think that they are realizing that they need women,” said  Varza, who was the lead for Microsoft’s startup activities in France, running both Bizspark and Microsoft Ventures programs for 3 years.

“There is no reason that a woman should be paid less than a man in any job,” she stressed. “There are different campaigns in France to make equal salaries for men and women.”

Varza travels to Iran at least once a year, this time to meet her old grandmother, Tooran Shahriyari, who was one of the first female Iranian lawyers, and is also a poet living in Tehran.

“I think Iran is also in a very exciting time, because its economy and market is very attractive for foreigners,” Varza noted, adding, “Foreigners want to learn about Iran and they want to be connected with Iran; and I think Iran is a very good place for investment right now.”