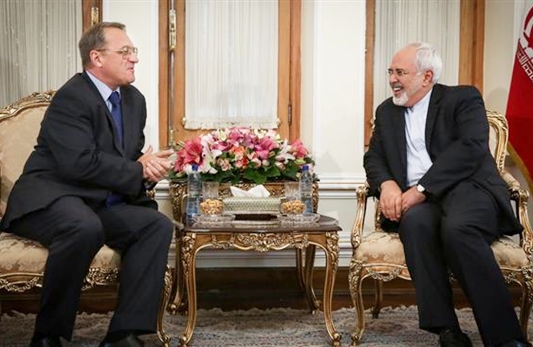 In a meeting on Monday, Iranian and Russian officials exchanged views about major issues in the Middle East, particularly the latest developments in the war-stricken Syria.

During the meeting, Zarif and Bogdanov stressed the importance of closer consultation between Iran and Russia on ways to solve the crisis in Syria.

Bogdanov, who also serves as Russian President Vladimir Putin’s special envoy to the Middle East, is in Tehran to hold talks with senior Iranian officials. Earlier on Monday, he met with Iranian Deputy Foreign Minister for Arab and African Affairs Hossein Jaberi Ansari.

Iran and Russia are Syria’s main allies and have been assisting the government in Damascus in its fight against foreign-backed terrorist groups, including Takfiri ISIS terrorists.

Since September 30, 2015, Russia has been conducting airstrikes against Daesh and other terrorist groups in Syria at the Syrian government’s request.

Iran has also been providing advisory military assistance to the Syrian government.

Syria has been gripped by a foreign-backed militancy since March 2011. UN special envoy for Syria Staffan de Mistura estimates that over 400,000 people have been killed in the conflict.