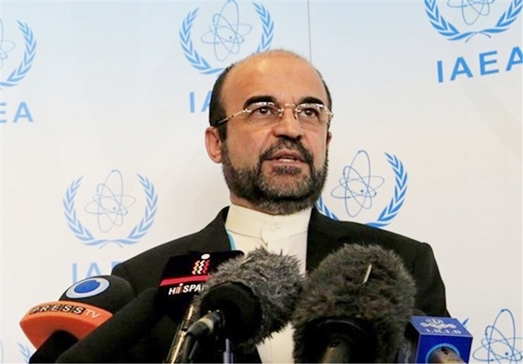 Iran’s ambassador to the International Atomic Energy Agency (IAEA) called on all parties involved in a lasting nuclear deal between Tehran and world powers to “demonstrate their good faith in practice and action on the ground” for the successful implementation of the JCPOA.

“The E3/EU+3 have a clear obligation to implement the JCPOA (Joint Comprehensive Plan of Action) in good faith and in a constructive atmosphere, based on mutual respect, and to refrain from any action inconsistent with the letter, spirit and intent of the JCPOA that would undermine its successful implementation. Making statements are not enough,” Najafi said in an address to the IAEA’s Board of Governors on Wednesday.

“They should demonstrate their good faith in practice and action on the ground,” he added.

Tehran and the Group 5+1 (Russia, China, the US, Britain, France and Germany) on July 14, 2015 finalized the JCPOA and started implementing it on January 16. The deal terminated all nuclear-related sanctions against Tehran after coming into force.

The following is the full text of Najafi’s speech:

At the outset, I would like to appreciate the Agency’s efforts regarding the monitoring and verification of the Joint Comprehensive Plan of Action (JCPOA) in the Islamic Republic of Iran.

Since the JCPOA Implementation Day, when all provisions of previous United Nations Security Council (UNSC) resolutions as well as the Boards’ resolutions on Iranian nuclear issue were terminated, Iran has continued to fully implement its share of the deal which was monitored and verified by the Agency.

As we have stated from the beginning of this process, reciprocal and full implementation of the commitments by E3/EU+3 is the essential foundation of the JCPOA and the crucial part of the agreement for its longevity. Comprehensive lifting of all UNSC sanctions and all unilateral or multilateral nuclear-related sanctions which were legally materialized must lead to further cooperation with Iran in all fields.

Although results of the JCPOA on cooperation with Iran have been progressed and new agreements in different fields particularly in economy and trade are being signed, the pace of their implementation is not adequate. The E3/EU+3 have a clear obligation to implement the JCPOA “in good faith and in a constructive atmosphere, based on mutual respect, and to refrain from any action inconsistent with the letter, spirit and intent of the JCPOA that would undermine its successful implementation”. Making statements are not enough. They should demonstrate their good faith in practice and action on the ground.

The JCPOA and the Board resolution GOV/2015/72 has requested the Director General “to provide written updates before each regular quarterly Board meeting”. We note the recent update provided by the Director General (GOV/2016/23) which demonstrates that the nuclear related measures were fully implemented by Iran. In our view this update still could be a shorter one and some unnecessary information could be avoided. In the meantime, my delegation once more would like to recall that in addition to the provisions of Comprehensive Safeguards Agreement and Article 5 of the Additional Protocol for protection of confidential information, the JCPOA clearly requests the Agency “to take every precaution to protect commercial, technological and industrial secrets as well as other confidential information coming to its knowledge”. In this regard, the efforts of the Safeguards Department of the Agency are appreciable. However, such efforts should be redoubled since we are approaching an important step in the implementation of the Additional Protocol regarding the initial declaration.

While we continue to fully implement our commitments, we carefully monitor the implementation of the obligations of the other parties under the JCPOA.

For the last speaker before me, as usual you heard an irrelevant statement. For the Zionist regime of Israel that has never acceded to any international treaties banning weapons of mass destruction and has never forgone the use and development of WMDs, including nuclear weapons, has never let any IAEA inspector to go into its unwarranted clandestine nuclear facilities, and sitting on tens of nuclear warheads, talking about proliferation concern is ridiculous.

Let this regime continue to cry wolf about the safeguarded peaceful nuclear programs of the other IAEA members. But certainly it can no more create a smokescreen for Israeli nuclear weapons program which is a real threat to regional and international peace and security.