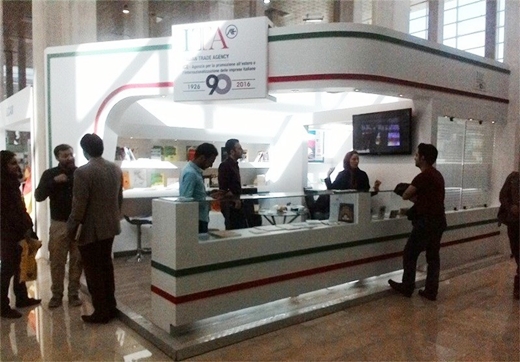 Cesaro was at the book fair to attend “Italy Day”, a program arranged by the organizers to promote Italian culture. He was accompanied by Italian Ambassador Mauro Konchater and Cultural Attaché Carlo Cherti.

Cesaro expressed his satisfaction over the dedication of a day to Italy at the fair, and said that such events can help with the expansion of diplomatic and cultural ties between the two countries.

Salehi, who is also the Deputy Culture Minister for Cultural Affairs, said Iranians and Italians recognize each other through their rich literary traditions.

“Literature is the common soul of the Iranian and Italian nations, and we can lean toward this soul to expand our ties,” Salehi said.

“This affiliation has formed over several centuries, and can be regarded as a focal point in the cultural interactions between the two countries,” he added. Italy will be the guest of honor at the TIBF in 2017.

“Tomorrow Is Too Late to Read” is the motto of the 2016 TIBF, which runs until May 14 at Shahr-e Aftab, a newly-constructed fairground in southern Tehran. To see photos of the exhibition site, click here.