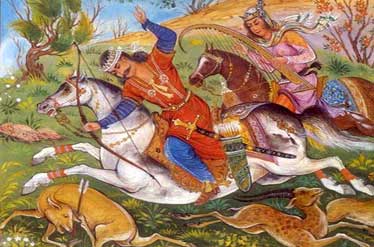 Two Iranian ancient legends, ‘Chel Gis’ (Persian for ‘forty plaits of hair’) and ‘Bahram Gur’ (a Sasanian king) will be incorporated into a novel.

Majid Sahfie, who is an author of teen and young adult books, told Mehr News that “a new novel, Bahram and the Bright Genie was in the process of composition and would be published by the Institute for the Intellectual Development of Children and Young Adults.

He maintained that the title was not final and other titles were available that might be chosen for the novel. “The story is generally about the labor child and the story turns to be a fantasy narrating Old Iranian legend stories.        I incorporated two legends, ‘Chel Gis’ and ‘Bahram Gur’ to the work,” said Sahfie and added that the latter had been featured in works of Persian poets’ works Nezami’s Haft Paykar (“Seven Beauties”) and Firdausi’s Shahnameh (The Epic of Kings).

“It is a modern rendering of the story of Bahram Gur for the readers,” said Sahfie.