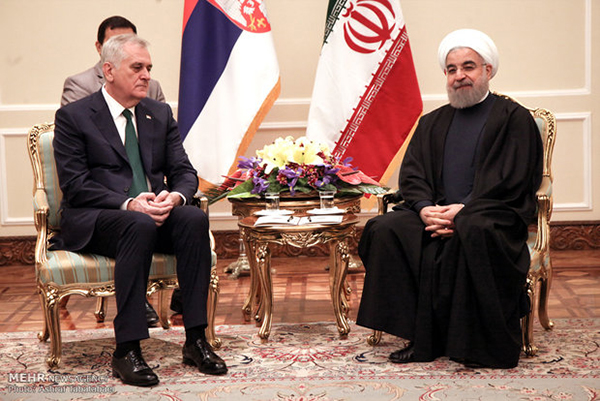 In a meeting with his Serbian counterpart Tomislav Nikolić, Iran’s President Hassan Rouhani said his country is keenly interested in boosting ties with the EU, including the Balkans.

The meeting took place on Sunday following a non-official visit of Serbian Presdient Tomislav Nikolić to Iran to attend the opening ceremony of the fifth Symposium of World Federation of Neurosurgical Societies due on April 17-22.

President Rouhani maintained that Tehran and Belgrade have ample capabilities and potentials that could be used to expand cooperation in line with mutual interests.

Rouhani then deemed spread of terrorism and violence one of the major problems for the region and the world, roundly condemning certain attempts for relating terrorism to religions; “divine religions, and particularly Islam, promote kindness and friendship among human beings, are fundamentally against terrorism, and thus all must unite in the fight against it.”

Nikolić, for his part, expressed his country’s interest in expanding ties with Iran, adding “the Islamic Republic’s fierce resistance during the time of sanctions and the nuclear negotiations indicates the country’s greatness and rich cultural roots.”

The Serbian president, heading a high-ranking economic and scientific delegation, is also scheduled to meet with Vice-President for Scientific and Technology Affairs Sorena Sattari.