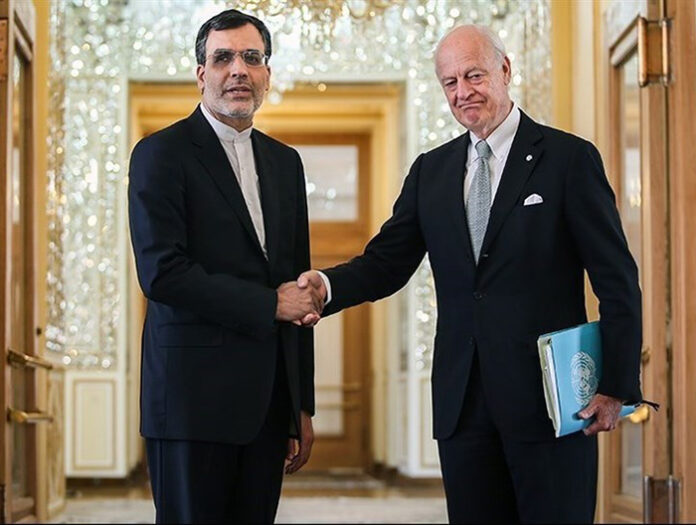 A senior Iranian official has reiterated the Islamic Republic’s support for any solution chosen by Syrians to solve the five-year crisis in the Arab country.

“The Islamic Republic of Iran will support any solution which is approved by the Syrian government, nation and political groups,” Iranian Deputy Foreign Minister for Arab and African Affairs Hossein Jaberi Ansari said in a meeting with United Nations Special Envoy for Syria Staffan de Mistura in Tehran on Sunday.

He emphasized that Tehran will continue with its support for a political solution to the Syrian conflict.

Highlighting the complexity of the conflict in Syria, the Iranian diplomat said some key players in the crisis have shifted their policies in order to realize through diplomatic means the objectives that they had failed to achieve militarily.

The Iranian deputy foreign minister noted that attending to the realities on the ground in Syria will be the most important step toward the success of a political solution to the conflict in the Arab state.

Jaberi Ansari and de Mistura called for the continuation of bilateral consultation in a bid to help settle the Syrian crisis through political approaches.

The UN envoy for Syria arrived in Tehran on Sunday to hold talks with senior Iranian officials ahead of the resumption of the peace talks on the conflict in the Arab country.

Speaking at a news conference in Berlin on July 22, the UN official said there was determination to find a proper date for the resumption of the Syria peace talks.

“We are determined to actually look for a proper date in August for re-launching the intra-Syrian talks in Geneva,” de Mistura said.

He expressed optimism that the results of talks between the US and Russia can be helpful in resolving the crisis in Syria, saying the two sides have agreed to take some “concrete steps” to restore peace to the Arab country.

The US and Russia are still divided over the future of Syrian President Bashar al-Assad. Washington insists that Assad must step down before any peace process can yield results, but Russia opposes the idea, arguing that the Syrian president is defending his country against terrorists.

Syria has been gripped by foreign-backed militancy since March 2011. The UN special envoy for Syria estimates that over 400,000 people have been killed in the conflict.