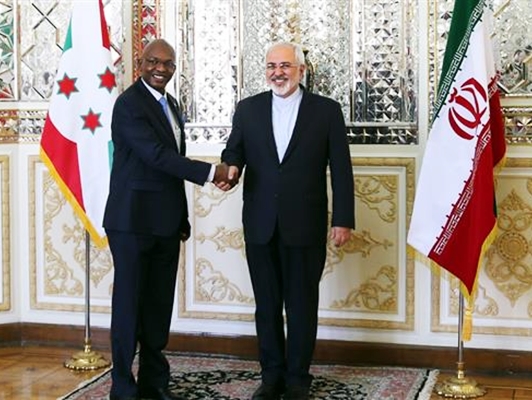 “The Islamic Republic of Iran supports political stability in Burundi and is ready to expand cooperation with this country in science, education, energy and agriculture,” Zarif said in a meeting with the Burundian Minister of External Relations and International Cooperation, Alain Aime Nyamitwe, in Tehran on Monday, August 15.

He hailed Burundi’s stances in international organizations, particularly the United Nations and the Non-Aligned Movement, and said cooperation with African countries at mutual and international levels is a favourable opportunity.

The top Iranian diplomat added that the Islamic Republic pursues a positive and constructive approach to the expansion of relations with African states.

Zarif urged Tehran and Bujumbura to further bolster their very good relations in a variety of different sectors.

Nyamitwe, for his part, said Iran enjoys a key status in the region and the world and added that Bujumbura attaches special significance to enhanced relations with Tehran.

He called for cooperation among Iranian and Burundian universities.

The Burundian minister is in Tehran to hold talks with senior Iranian officials. He is scheduled to meet Iranian President Hassan Rouhani and submit a written message of his Burundian counterpart to him.

Nyamitwe will also confer with Minister of Science, Research and Technology Mohammad Farhadi and officials of the Ministry of Petroleum.

In February 2015, the Iranian foreign minister paid a diplomatic tour of four East African countries – Kenya, Uganda, Burundi, and Tanzania – which has been described as the beginning of a new chapter in Tehran’s ties with African countries.

Iran already has a significant presence in agricultural and economic projects in some African countries and has been a major contributor to humanitarian missions across the continent over the past years.

Iran’s active diplomacy in Africa has been construed as a sign of the country’s willingness to engage deeper in Africa’s political and economic equations; a move that can secure the country’s foothold in the region following the removal of sanctions against the Islamic Republic over its nuclear program.