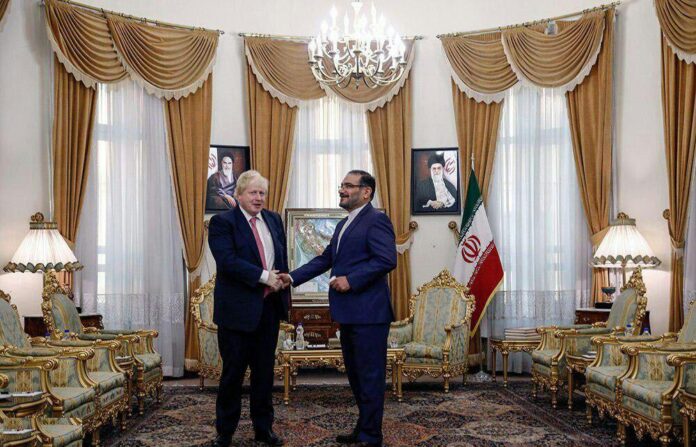 A top Iranian official has rapped London for selling arms to the criminal regime of Saudi Arabia, saying those who help Riyadh slaughter the innocent people of Yemen are considered violators of human rights.

Secretary of Iran’s Supreme National Security Council Ali Shamkhani says while all international bodies condemn the siege and bombardment of the oppressed and defenceless people of Yemen, those who help Saudis commit such crimes will certainly be convicted by the public opinion and would be introduced as human rights violators.

Shamkhani made the remarks on Saturday in a meeting with British Foreign Secretary Boris Johnson who is Tehran on a two-day visit.

“The Western countries not only do not allow international institutions to perform their duty to identify the Saudi crimes in Yemen, but also do not show willingness to stop the process of selling and transferring weapons to Saudi Arabia,” stressed Shamkhani, criticizing the UK for selling arms to Riyadh.

The top official also criticized the non-compliance of the US and European countries with the nuclear deal noting that as the other parties to the deal are passive towards Washington’s moves, the Islamic Republic has made its decision to take necessary measures, if necessary, to return to the conditions before the deal.

He slammed the positions of some countries against Iran’s regional policies, saying that Tehran is serious in countering terrorism, and if it was not for the policies and actions of the Islamic Republic for which hundreds of people were martyred, ISIS today was ruling in Iraq and Syria, and had reached European borders.

Shamkhani also noted that at present and after the nuclear deal, trade and economic cooperation between the two countries is not satisfactory saying that facilitating banking relations could expand cooperation in other fields.

For his part, Johnson stressed that more efforts must be made to remove the obstacles to implementation of the JCPOA, particularly in the sphere of financial deals and banking relations.

He further pointed out that the JCPOA is a multilateral and international agreement whose full implementation is in the interest of global peace and stability.