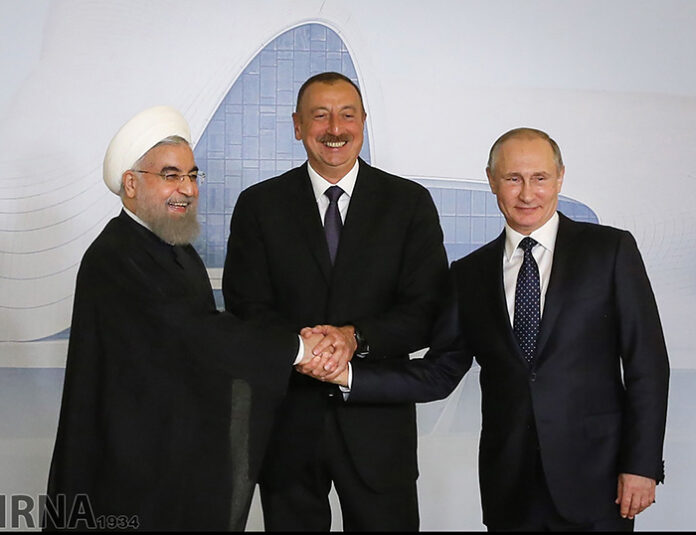 Iran, Russia and Azerbaijan have vowed to work together to prepare the grounds for the construction of a North-South Transit Corridor (NSTC) which is expected to provide a faster and more efficient trade connectivity between Europe and South East Asia.

The three presidents announced in a joint statement at the end of the historic Baku summit that they would take the required measures to materialize the NSTC with the ultimate objective to exploit the economic opportunities it creates.

The statement was read out after the summit in which Russia’s President Vladimir Putin, Iran’s President Hassan Rouhani and Azerbaijan’s President Ilham Aliyev had participated.

They also emphasized that their respective countries would try to increase their own shares in efforts to create the NSTC “based on their common interests”.

The NSTC is a multi-modal route to link India and the Middle East to the Caucasus, Central Asia and Europe.

The ship, road and rail route connects India’s Mumbai to the Iranian port of Bandar Abbas and further to Baku in Azerbaijan as well as Astrakhan, Moscow and St Petersburg in Russia before stretching to northern Europe and Scandinavia.

In addition to Iran, India and Russia, countries that are on board to integrate into the transit network include Armenia, Azerbaijan, Belarus, Kyrgyzstan, Kazakhstan, Ukraine, Turkey, Tajikistan, Oman, Syria and Bulgaria.

The NSTC was a central theme in the summit of Putin, Rouhani and Aliyev.

“Our talks will focus on a flagship project – the International North–South Transport Corridor with a total length of 7,200 kilometers,” Russian President Vladimir Putin quoted as saying by the media before leaving for Baku.

The three presidents also agreed to cooperate on natural gas industry. They said in their statement that they will specifically work together over the transfer of technology as well as the shipment and delivery of gas.

Putin, Rouhani and Aliyev also voiced support for efforts to connect the power grids of their respective countries – what they said would contribute to the sustainable development of the region.

The significance of close banking cooperation to attract investments and bring in new technologies for development projects was also highlighted in the trilateral talks.