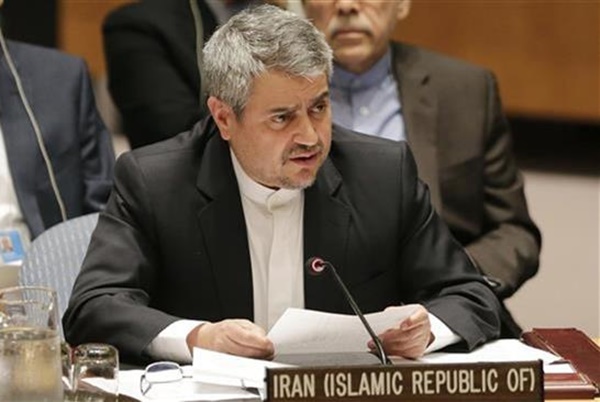 Iran's ambassador and permanent representative to the United Nations has rejected "unfounded" allegations by nearly a dozen Arab states that Tehran was meddling in their internal affairs.

Khoshroo denounced the accusation by those who “had been providing unwavering military and financial support” to  former Iraqi dictator Saddam Hussein in his eight-year bloody war against Iran in the 1980s.

The Iranian diplomat also dismissed accusations made by the same countries that Tehran was supporting terrorist groups in the region.

“It is ridiculous that those regimes who themselves are the nurturers and exporters of extremism and Takfiri dogma to Iraq, Syria and other countries are now accusing Iran of supporting terrorism,” he said.

The official further censured UAE claims about Iranian islands of Abu Musa, Greater Tunb and Lesser Tunb, reaffirming that the three islands are an “inseparable” part of Iran.

The three Persian Gulf islands have always been part of Iran historically, the proof of which can be found in and corroborated by countless historical, legal, and geographical documents.