Iranian Foreign Minister Mohammad Javad Zarif has embarked on a six-nation tour of Latin America at the head of a high-ranking politico-economic delegation.

On Sunday morning, Zarif left Tehran for Cuba as the first leg of his official visit to Latin America, leading a group comprised of 120 merchants, businessmen and financial executives in government and private sectors.

After a working day, the Iranian top diplomat will then travel to Nicaragua to discuss the promotion of economic cooperation with senior leaders and officials in the Central American country.

The Iranian delegation will then visit Ecuador, Chile, Bolivia and Venezuela, where he is slated to sit down for talks with high-ranking officials and take part in joint economic seminars.

Zarif’s trip to Chile comes a few months after the reopening of the South American state’s embassy in Tehran 37 years following the victory of the 1979 Islamic Revolution. 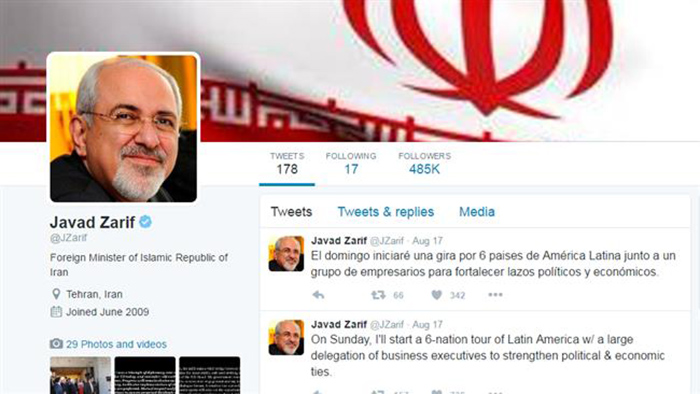 Prior to Zarif’s departure, Iranian Foreign Ministry Spokesman Bahram Qasemi said Saturday that the expansion of ties with Latin American and African countries has always been on the agenda of the Islamic Republic’s foreign policy.

He further noted that the Latin American countries are important for Iran due to political and cultural commonalities and congruity at international organizations and circles, particularly at the Non-Aligned Movement (NAM).

“Today, Iran has such a position that it can pick its political friends and trade partners and does not have to cooperate with a specific country or region in the world,” he added.

On Wednesday, Iran’s Deputy Foreign Minister for European and American Affairs Majid Takht-e-Ravanchi underlined the importance of Zarif’s tour, saying it will open a “new chapter in the relations between Iran and Latin America.”

He also described Latin America of “high significance” to Tehran and stressed that “there are many areas for cooperation between Iran and the countries of that region despite a long distance.”