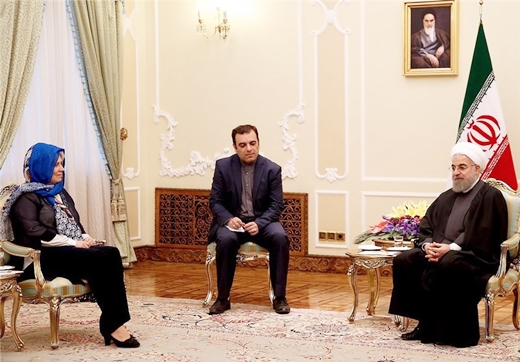 Iranian President Hassan Rouhani said Tehran welcomes warmer ties with the European Union, noting that such cooperation will greatly contribute to the settlement of regional and international issues.

Iran seeks to promote and deepen cooperation with the EU countries, including Estonia, President Rouhani said in a meeting with Estonian Foreign Minister Marina Kaljurand, in Tehran on Sunday.

“Expansion of multilateral cooperation between the European Union and Iran is of great significance in the settlement of the complicated regional and international problems,” the president added.

He then pointed to the “destabilizing” activities of terrorist groups in the Middle East, calling for a serious fight against terrorism to prevent it from spreading to other regions, including Europe.

“One of the grounds for cooperation between Iran and the European Union would be consultation and coordination for maintaining regional stability and security,” Rouhani added.

The president further made a reference to the historical friendly relations between Tehran and Tallinn, and called for the enhancement of bilateral cultural and academic ties, such as the exchange of academics and joint research projects.

For her part, the visiting Estonian minister hailed Iran as a leading actor in regional and international developments, and expressed her country’s willingness to boost relations with the Islamic Republic in all fields of mutual interest.

Kaljurand’s visit comes against a backdrop of global enthusiasm for closer ties with Iran following the implementation of the Joint Comprehensive Plan of Action (JCPOA), a lasting nuclear deal between Iran and the Group 5+1 (Russia, China, the US, Britain, France and Germany).