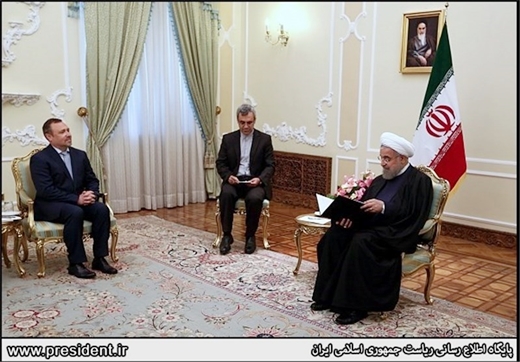 Iranian President Hassan Rouhani expressed the country’s willingness to enhance relations with Ukraine and Montenegro in light of the Joint Comprehensive Plan of Action (JCPOA), a lasting nuclear deal that has lifted international sanctions on Iran.

President Rouhani held separate meetings with the incoming ambassadors of Ukraine and Montenegro on Tuesday and received their credentials.

In the meeting with Ukrainian Ambassador Sergei Buldiliak, the Iranian president said the post-sanctions era has opened up an opportunity for Tehran and Kiev to promote bilateral cooperation.

He voiced Iran’s enthusiasm for expanding political, economic and cultural relations with Ukraine.

The European envoy, for his part, said he sees good prospects for cooperation between the two nations.

In the meeting with Montenegro’s Accredited Ambassador to Tehran Branko Milic, President Rouhani said the Islamic Republic of Iran’s administration is ready to expand relations with Montenegro in the economic, energy, industrial and tourism fields.

Milic, too, emphasized that a good atmosphere exists for the promotion of cooperation between Podgorica and Tehran.

The implementation earlier this year of the JCPOA, the comprehensive nuclear deal between Tehran and the Group 5+1 (Russia, China, the US, Britain, France and Germany), has prompted the international community to pursue closer ties with Iran.