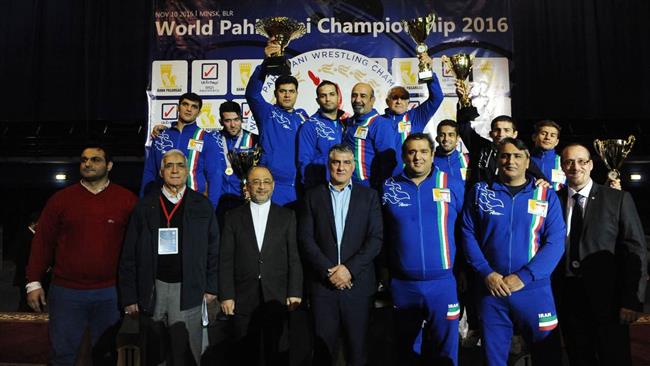 National Iranian Pahlavani wrestling team has been crowned as the champion at the first edition of Pahlavani Wrestling World Championship in Belarus.

The Iranian outfit stood on top of the podium with a total of six (four gold, one silver and one bronze) medals, having collected 57 points. Turkey finished in the second place, and Russia landed in the third spot.

Additionally, in the men’s 90-kilogram division, Esmaeil Nejatian got the better of Turkish rival Ahmet Bilici in the final contest to add another gold to the Islamic Republic’s medal tally at the tournament.

Jalal Alizadeh , who had prevailed over Georgian, Belarusian and Kazakh wrestlers in the march to the final contest of 60-kilogram weight category, was downed by technical fall to Azerbaijani opponent Jalal Suleymanov and received the silver medal.

The first edition of Pahlavani Wrestling World Championship opened in the Belarusian capital of Minsk on November 10 and finished on November 13, 2016.