Iran Considers WMD as Redline for Its Defence Program: Leader 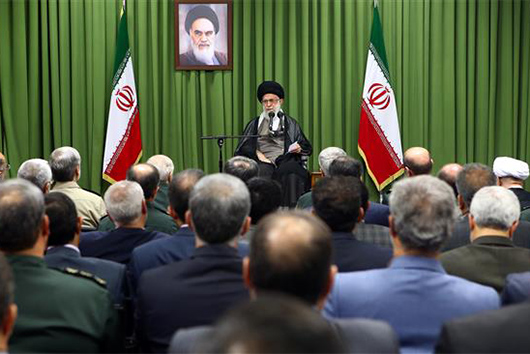 Leader of the Islamic Revolution Ayatollah Seyyed Ali Khamenei says Iran considers development of weapons of mass destruction (WMDs), including nuclear and chemical weapons, as redline for its defence program.

The Leader made the remarks addressing a group of top officials and specialists of Iran’s Ministry of Defence after touring an exhibition of the achievements of Iran’s defence industries on Wednesday, August 31.
“Under conditions when bullying world powers have spread their umbrella of power and no mercy is seen in them and openly attack marriage ceremonies and hospitals on the pretext of fighting against terrorism, killing hundreds of innocent people without being accountable to any [international] organization or institution, [Iran’s] defensive capability and power must be increased so that bullying powers would feel threatened,” Ayatollah Khamenei said.
The Leader added that Iran considers limitations for developing its defence industries and considers building nuclear and chemical weapons prohibited on the basis of its ideological beliefs.
“Apart from these limitations, there is no limitation in other fields for increasing our defence and military capability and progress in these fields is a duty,” the Leader said, adding that to preserve the country’s security and future of the nation, “in addition to defensive capability, offensive capability should be also bolstered.”

US Not Morally Qualified to Talk about Iran
Elsewhere in his remarks, the Leader of the Islamic Revolution said the US government is not morally qualified to pass judgment on the Islamic Republic, noting that this includes both the ruling Democrat Party and its rival, the Republican Party.
The Leader said “creation of dangerous terrorist networks” was the “biggest sin” committed by the party that supports the incumbent US administration, adding, “The existing government of America apparently attacks one terrorist group, but excludes another terrorist group, which means that politics is governing ethics.”
Saying that the former US administration was also responsible for crimes in Iraq and Afghanistan, Ayatollah Khamenei concluded that “none of the two dominant parties in America is preferable over the other in terms of moral competence.”

No Understanding with US through Negotiations
Ayatollah Khamenei went on to say, “We are faced with such government in America and it would be a mistake to think that we can reach understanding and common grounds [with them] through negotiations.”
“This is why I insist on the necessity of not negotiating with America and experience has proven that instead of understanding, Americans are trying to impose their demands through negotiations, a prominent example of which was the recent developments [regarding Iran’s nuclear deal].”