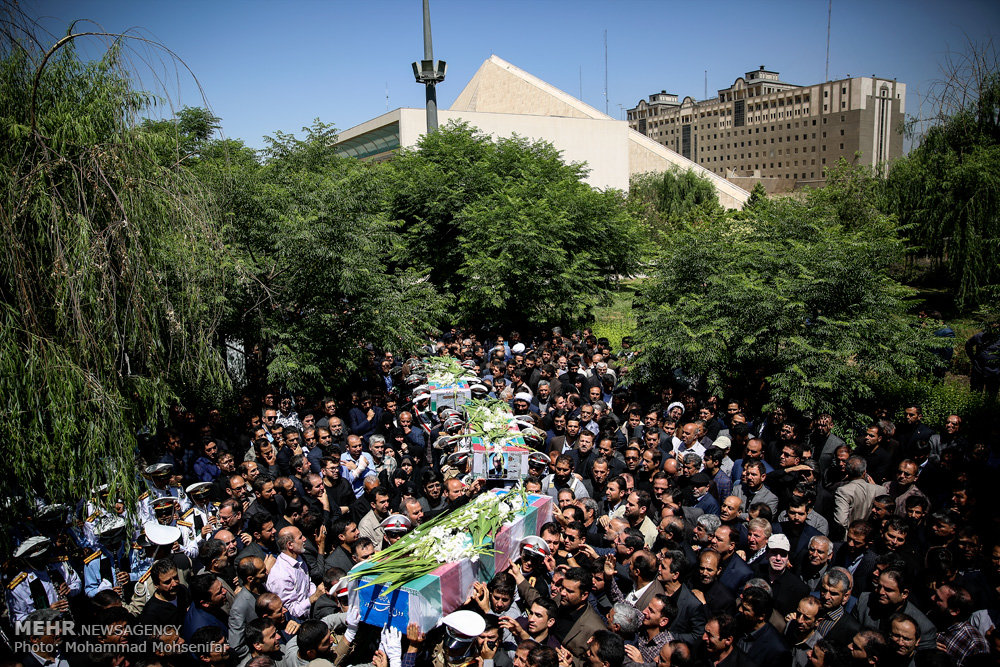 Majlis (Iran’s Parliament), which came under a terror attack recently, is hosting a funeral ceremony for the victims of the incident, and another concomitant one, which targeted Imam Khomeini’s Mausoleum.

Also joining the ceremony were government ministers, and Ayatollah Mohammad Mohammadi-Golpayegani, the head of the office of Leader of the Islamic Revolution Ayatollah Seyyed Ali Khamenei, Press TV reported.

Others included foreign ambassadors, and survivors of the Wednesday attacks, who were holding up pictures of the victims.

Addressing the ceremony, the parliament chief said, “Today is a hard day for the Iranian nation. Farewell to dear ones, who were sadly martyred.”

“The terrorists fell short of their [main] aim” and then started to blindly target civilians and employees, he said.

Their targeting the locations, Larijani said, indicated their concentration on the “axes of the Iranian people’s religious democracy.”

Ayatollah Mohammadi-Golpayegani also delivered the Leader’s message of condolences to the event.

He was referring to the big turnout of Iranians in the May 19 presidential elections.

Rouhani added that it is not the first time the nation witnesses such acts of terror, stressing that “people will find their own path to national goals and unity, and the nation will undoubtedly emerge victorious.”

A funeral procession also started for the victims after the Friday Prayers in the capital.

Large groups of people are taking part in the ceremony, chanting slogans against Saudi Arabia, the US and Israel, whom they blame for supporting terrorism.

At least 17 people were killed and more than 50 injured in Tehran on Wednesday, when gunmen attacked Iran’s Parliament (Majlis) and the Mausoleum of the late Founder of the Islamic Republic Imam Khomeini.

On Thursday, the Iranian Intelligence Ministry released the names of the five terrorists who were killed after carrying out the deadly attacks in Tehran.

Local police in Iran’s western province of Kermanshah also said two people have been arrested in connection with the double attacks, while over 90 handguns have been discovered during a security operation in Ravansar County, the Tasnim news agency reported.

Here are Mehr’s photos of the funeral ceremony: