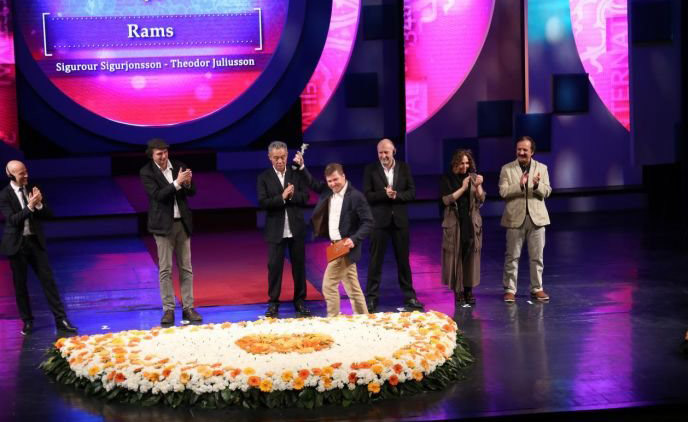 The 34th edition of the Fajr International Film Festival (FIFF), which kicked off in Tehran on April 20th, ended on Monday night.

Rams, a humanist drama by Icelandic director Grimur Hakonarson, has won the Golden Simorgh for best film in the main competition – Cinema Salvation – at the 34th Fajr International Film Festival.

Producer Grimar Jonsson was not in attendance at the closing ceremony held at Tehran’s Vahdat Hall on Monday, so a member of the film’s art department received the award.

The story of the film is set in a remote Icelandic farming valley, where two brothers who haven’t spoken in 40 years have to come together in order to save what’s dearest to them – their sheep.

The Jury special award didn’t leave the country, as Iranian director Puria Azarbaijani received the honour for Arvand, about an Iranian war veteran who is suffering from a mental disorder.

The Silver Simorgh for best director was presented to Turkish filmmaker Emin Alper for Frenzy, and Spanish writer/director Asier Altuna Iza won the award for best screenwriter for When a Tree Falls.

The Silver Simorgh for best actress went to Pantea Panahiha for her role in Iranian drama Breath by director Narges Abyar.

Below is a selection of photos from the festival’s closing ceremony.

“I Could Never Complain about Iranian Acting” – Alexander Sokurov