Europeans Working with US Accomplice in Trump’s Crimes: Iran 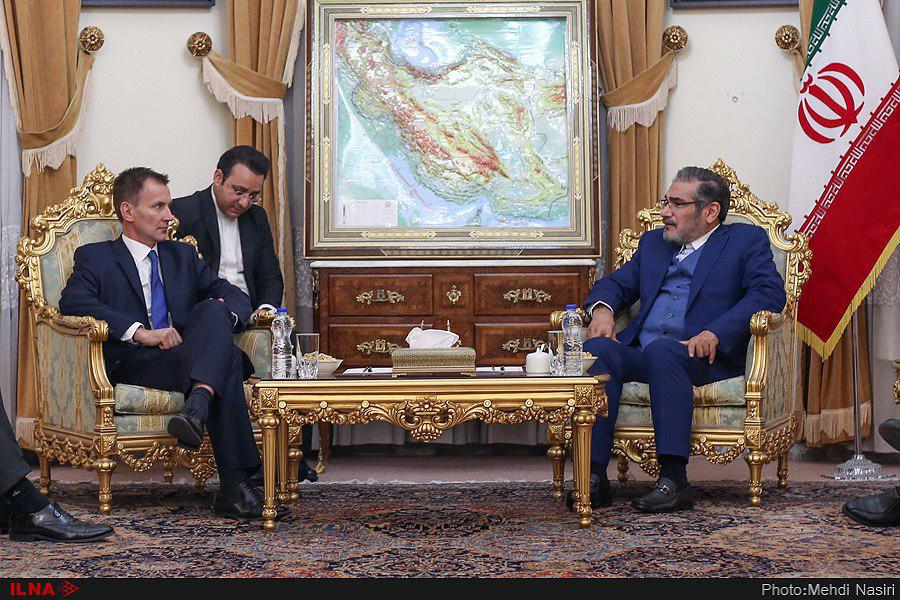 Secretary of Iran's Supreme National Security Council (SNSC) Ali Shamkhani says European countries collaborating with the United States' policies are accomplices in crimes committed by the US, the Israeli regime and reactionary states in the region.

“Any collaboration of some European countries with policies of [US President Donald] Trump’s administration will have negative impacts on long-term relations with our country,” Shamkhani said in a meeting with British Foreign Secretary Jeremy Hunt in Tehran on Monday.

It will also lead to “a negative view of these [European] countries in the public opinion of Iranian people and regional nations” regarding them “as parties to crimes committed by the US, Zionist regime (Israel) and reactionary [states] in the region,” Shamkhani added.

He warned that if the US succeeded to impose its will on Europeans with regard to Iran, it would also interfere in their relations with other countries.

The senior Iranian official urged the European Union to resist the US excessive demands in order to defend its own identity and independence.

It is possible to create a stable world without any violence and insecurity by refraining from abiding by the US and Israeli policies and adopting an independent stance with the purpose of serving the nations’ common interests, Shamkhani said.

Earlier this month, the Trump’s administration announced the re-imposition of the “toughest” sanctions ever against Iran’s banking and energy sectors with the aim of cutting off the country’s oil sales and crucial exports. The announcement came after Washington withdrew in May from the landmark Iran nuclear agreement, officially known as the Joint Comprehensive Plan of Action (JCPOA), and decided to re-impose unilateral sanctions against Tehran.

The US administration had been hoping to get the other parties to the deal with Iran to likewise scrap the deal. Instead, they have stressed that not only will they stick to the agreement, but they will also work to sustain it in the face of increased US pressure.

Elsewhere in his remarks, Shamkhani criticized some countries’ baseless positions on Iran’s regional policies, saying that Daesh terrorist group would have full control over Syria and Iraq in the absence of the Islamic Republic’s practical measures against terrorism.

He slammed the British government’s lack of severe action on media outlets supporting a terrorist group, which killed innocent people in the southwestern Iranian city of Ahvaz in September, pointing out, “It is expected that the British government explicitly announce its stance on the necessity to counter terrorism and human rights violation.”

On September 22, terrorists opened fire at a crowd of people during a military parade in Ahvaz, killing 25 military personnel and civilians — including women and children — and wounding 68 others.

Following the incident, the Saudi-backed London-based TV news station, Iran International, broadcast an interview with the spokesman of the al-Ahwaziya terrorist group, which had claimed responsibility for the attack.

Two days later, the Iranian embassy in London filed a lawsuit against the channel with the UK’s communications regulator, Ofcom, over its support for the al-Ahwaziya terrorist group.

“The Iranian embassy in London has taken its official lawsuit to ‘Ofcom’ [asking it] to investigate the Iran International TV channel’s illegal move to broadcast an interview with the spokesman of the [al-Ahwaziya] terrorist group,” Iranian ambassador to London Hamid Baeidinejad said.

Hunt, who is in Tehran as the first Western foreign minister since the US withdrawal from the JCPOA, said the Trump administration has created obstacles in the way of financial exchanges and banking relations between Iran and Europe.

The British foreign secretary added that Europe seeks to maintain the nuclear deal’s achievements and is firmly following up on ways to obtain this goal.

British Prime Minister Theresa May said in September that Iran is in compliance with its commitments under the nuclear deal, stressing that the agreement should be kept alive.

“From what we see, we believe that it is doing that,” May said.