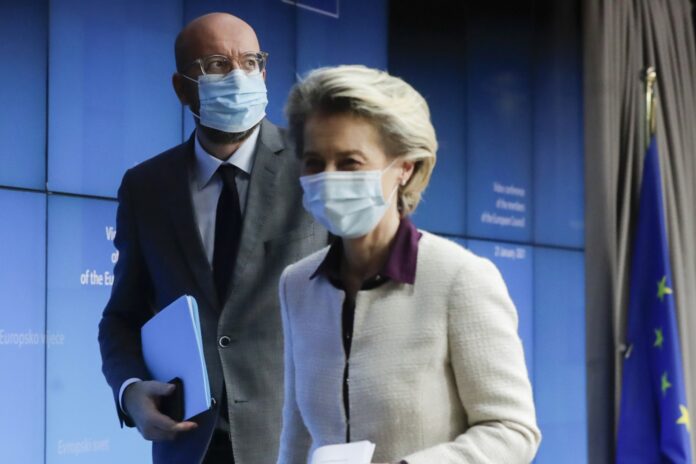 The EU’s top leaders accused U.S. President Joe Biden of disloyalty to the transatlantic alliance, urging him to explain why he misled France and other European partners in forging a new strategic tie-up with the U.K. and Australia in the Indo-Pacific.

The extraordinary rebuke of the new American president, whose election was celebrated across Europe as an opportunity to rejuvenate ties after the four years of belligerence and combativeness of Donald Trump, raised the prospect of a grave and prolonged breach among Western powers.

“With the new Joe Biden administration, America is back,” European Council President Charles Michel told reporters in New York, as world leaders convened for the high-level debate of the U.N. General Assembly.

“What does it mean America is back? Is America back in America or somewhere else? We don’t know,” he added.

By failing to consult EU nations about the new Indo-Pacific strategy, under which Australia canceled a blockbuster contract to buy French submarines, Michel stated Biden had discarded an agreement reached by leaders after many hours of talks at the G7 summit in Britain in June to remain united in confronting authoritarian regimes, particularly China.

“The elementary principles for an alliance are loyalty and transparency,” Michel said, adding, “We are observing a clear lack of transparency and loyalty.”

European Commission President Ursula von der Leyen voiced her own dismay during an interview with CNN, in which she called the treatment of France  “unacceptable” and demanded Biden provide an explanation.

“There are a lot of open questions that have to be answered,” von der Leyen said, adding, “One of our member states has been treated in a way that is not acceptable, so we want to know what happened and why. And therefore you first clarify that before you keep going with business as usual.”

Michel noted that the 27 EU heads of state and government would discuss the rift with the U.S. over dinner on October 5 in Slovenia, ahead of a summit focused on the Western Balkans.

And von der Leyen’s comment signaled potential disruption of the planned first meeting of a new EU-U.S. Trade and Technology Council in Pittsburgh next week — an event that was supposed to showcase the renewed policy partnerships between Brussels and Washington.

But despite the irate rhetoric, it was unclear what, if anything, EU leaders could say or do about the matter, which some EU diplomats and officials suggested was more of a commercial dispute between Paris and Canberra, and a matter of wounded French pride, than a genuine cause for rupturing relations with the U.S. and sowing divisions that could weaken NATO.

By coming in so squarely behind French President Emmanuel Macron — who still has said nothing publicly and is not attending the U.N. meetings — Michel and von der Leyen seemed to elevate the risk of a prolonged dispute that could be exploited by China, Russia and other rivals, and to increase the difficulty in finding a face-saving exit for the Western allies.

Michel insisted the feud should not be viewed narrowly as a matter of French economic interests, but rather as part of a pattern of disregard for European allies and their interests by four U.S. presidents, beginning when George W. Bush decided to wage war in Iraq and Afghanistan.

“[Barack] Obama with charisma, very polished, took important decisions in Syria with negative consequences for Europe, and we could observe also a lack of coordination, of consultation between the United States and European governments,” Michel stated, adding, “At least with Donald Trump it was very, very clear that he was not in favor of the European integration, that for him Europe doesn’t matter, but it was clear.”

Biden, on the other hand, talked a big game about renewing transatlantic ties, according to Michel, but then railroaded European allies with his decision about following through on Trump’s plan to withdraw from Afghanistan, “and”, he added, “a few days ago with this strange announcement”.

“When the transatlantic alliance is less robust and less solid, this is not good for the security in Europe and everywhere in the world,” Michel said, adding that “this is more than a bilateral trade or industrial topic. It’s more than that”.

Arriving in New York City on Monday, French Foreign Minister Jean-Yves Le Drian said all EU countries should be worried about the disregard the U.S. had shown its allies.

“Europeans shouldn’t be the rejects of the strategy chosen by the United States,” Le Drian continued, adding, “We are in this new state of mind, which means the Europeans need to identify their own strategic issues and to have a discussion with the United States on this topic.”

Le Drian noted that conversation was likely to occur in the context of the development of a new “strategic concept” at NATO, a tacit acknowledgment that addressing the affront by the Americans would take quite a bit of time, and some convincing of EU countries heavily reliant on the U.S. for security guarantees.

While Macron has remained silent, France has moved swiftly to retaliate by recalling ambassadors and also vowing to scuttle a proposed free-trade agreement between the EU and Australia.