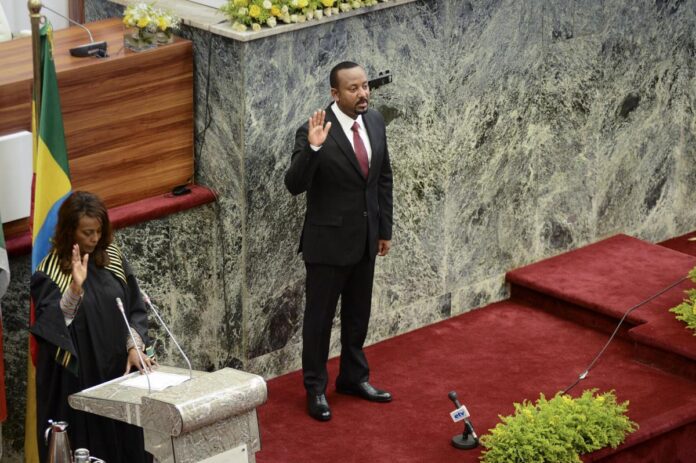 Ahmed has been sworn in for a new five-year term as his government faces a host of challenges, including a months-long conflict in the northern region of Tigray.

Abiy took the oath of office, administered by Supreme Court Chief Justice Meaza Ashenafi, on Monday following similar oaths by the speaker and deputy speaker of the parliament’s lower house.

“I, Abiy Ahmed Ali, today in the House of People’s Representatives, accept the appointment as prime minister, as I pledge to undertake responsibly and with faith to the constitution the responsibility placed upon me by the people,” he noted.

Abiy’s Prosperity Party was declared the winner of parliamentary elections earlier this year in a vote criticised and, at times, boycotted by opposition parties but described by some outside electoral observers as better run than those in the past.

In June, the prime minister’s party won 410 of the 436 parliamentary seats that were contested.

Three regions where elections had been delayed voted last month. Voting did not take place in the northern Tigray region which is under the control of regional forces opposed to the government in Addis Ababa.

The election marked the first time Abiy faced voters since he was appointed prime minister in 2018 following several years of anti-government protests.

The 11-month Tigray conflict is weakening Ethiopia’s economy, once one of Africa’s fastest growing, and threatening to isolate Abiy, once seen as a regional peacemaker.

Thousands have been killed in the conflict and hundreds of thousands faced famine-like conditions, according to the UN.

It is unclear whether Abiy’s swearing-in will alter the course of the war pitting government forces against the Tigray People’s Liberation Front (TPLF) rebel group, which dominated national politics before he took power.

Abiy’s office, which blames the rebels for starting the war last November with attacks on federal army camps, has said certain conciliatory measures, like declassifying the TPLF as a terrorist group, can only happen after a new government is formed.

“The position has been that any change in approach to the conflict with the forces from Tigray can only occur after the formation of a new government,” stated William Davison, senior Ethiopia analyst for the International Crisis Group.

International partners like the US, which has threatened to impose targeted sanctions related to the conflict, “will be looking at this closely to see if there is any shift in position”, Davison told AFP news agency.

Just three African heads of state – from Nigeria, Senegal and neighbouring Somalia – attended Monday’s ceremony. A mass rally in Addis Ababa’s Meskel Square, to be attended by dignitaries including the presidents of the three African countries, was planned for the afternoon.

“The road ahead might be daunting, but we shall not be weary,” Abiy’s senior adviser Mamo Mihretu wrote on Twitter.

Last week, Ethiopia’s government faced condemnation from the United Nations, United States and several European nations after it expelled seven UN officials it accused of supporting the Tigray forces who have been battling Ethiopian and allied forces.