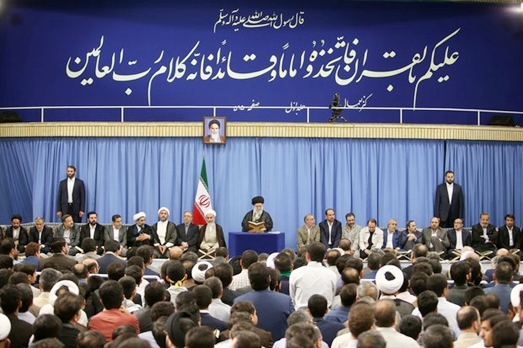 On the occasion of holy month of Ramadan, international Quran reciters and memorizers gathered in a recitation ceremony in the presence of Ayatollah Khamenei.

During the ceremony, which lasted for more than three hours, eight Quran memorizers, reciters and masters from across the country recited verses from the Quran and nashids, religious poems and songs praising God.

The Leader of the Islamic Revolution addressed the gathering at the end of the meeting, where he commemorated Quran reciters who were martyred in the Mina tragedy during Hajj season last year: “This year, we are sorrowful of loss of the reciters martyred in the Mina incident. May God exalt their position and accept their unfinished Hajj pilgrimage in the best possible way.”

Ayatollah Khamenei further highlighted the miracle of the beauty of the Quran’s words, which he deemed as a window to its excellent meanings; “The beauty of the Quran wins the hearts of mankind. While the wording of Quran is beautiful, its teachings are thousands of times more beautiful.”

“Today, the world needs the Quran; today world suffers from spiritual and intellectual emptiness. You can see that murder and crime rates in the western world are rising for this reason. If only a small part of the shining light of the Quran is sent to them with proper expression for today’s understanding, hearts will be absorbed and it will lay the groundwork for the true progress of mankind with dignity, power, wealth, spiritual excellence, intellect and belief, as well as happiness and peace of mind – these all rely upon implementing the teachings of the Holy Quran.”

Ayatollah Khamenei emphasized that belief structures needed to be reinforced and proper language must be applied in order to convey the message and teachings of the Quran to people all around the world. “If these concepts are transferred to the world, the Quran will be a mighty power, towards which superpowers and the Zionist [Israeli] regime can do nothing.”

He also stressed the expansion of ceremonies for reciting, memorizing or contemplating upon the Quran to increase the public’s closeness to the Holy Quran. “Just like mourning processions commemorating the martyrdom of Infallible Imams or the demise of the Prophet and his household, Quran recitation and listening events must be spread around the country, so that Quranic concepts can be spread as quickly as possible,” he said, continuing, “A blessing of more acquaintance with the Quran is spiritual peace of mind which paves the ground for the improvement of a human being’s faith in God Almighty and Divine Power.”