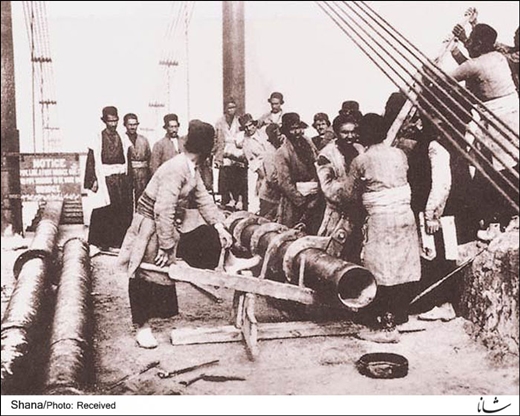 When the Anglo-Persian Oil Company purchased a parcel of land from Sheikh Khazal to build the most important oil refinery in the world, it was not aware how this treatment facility would change Iran’s history.

Abadan oil refinery has been instrumental during four historical periods, detailed below.

Here is Abadan. In 1909, one year after oil was discovered in Masjed Soleyman, the Anglo-Persian Oil Company purchased one square mile of land in the Bahmanshir area from Sheikh Khazal Bakhtiari, the local governor, and started building the most important oil refinery in the world. Due to its proximity to both the oil wells and fresh water, the location of the refinery was well-chosen. It could also serve as a favorable harbour for oil tankers and cargo vessels. Three years later, this refinery started work at a capacity of 2,500 b/d.

During World War I, Abadan was of great help to Britain’s war operations with its oil refining. The British government protected the treatment facility seriously throughout the war. The war was a pretext for further developing the refinery to produce more fuel for warships. During WWII, once the Allies had lost Burma’s oil and refineries, Abadan once again became the center of attention.

Abadan had become the biggest refinery in the world. Its reputation grew due to its delivery of 25,000 b/d of jet fuel during WWII. This supply of gasoline to the Allies’ fighter jets was a key factor in their victory.

After the oil industry was nationalized in 1951, and foreigners left, the maintenance of the refinery was assigned to Iranian staff and oil service workers. In 1954, an agreement was signed with the International Oil Consortium.

In August 1973, by virtue of Iran’s sovereignty on oil resources, the administration of Abadan oil refinery was assigned directly to the National Iranian Oil Company (NIOC). After that, Abadan refinery was developed to increase its capacity from 460,000 b/d to 600,000 b/d. After that development in September 1977, Abadan regained its status as the largest refinery in the world.

Before the Iran-Iraq war in 1980, Abadan produced 108 types of products. It had the most sophisticated installations for exporting products, used natural gas as its main source of fuel and was fitted with the largest electronic measurement machinery. It was therefore considered to be the most important refinery in the world.

As revolutionary fervour gained momentum in November 1978, oil service workers at the Abadan refinery went on strike. The refinery’s output was cut from 600,000 b/d to 150,000 b/d. Within weeks, oil production in Iran plunged into crisis, and the Shah’s regime came under heavy pressure.

Responding to an appeal by the late revolutionary founder Ayatollah Ruhollah Khomeini, the striking workers did not return to work. At the same time, military forces stopped distributing kerosene in the country, which ramped up pressure on people. With the Revolution, the general strike ended and the refinery resumed production.

On September 21, 1980, workers were going to the refinery as usual. All of a sudden, loud explosions were heard – the city of Abadan was under fire. On September 23, the refinery was attacked by the forces of the former Baathist regime of Iraq. Abadan refinery was the first oil facility to be targeted by Iraqi warplanes. That was when a new chapter in the efforts and sacrifices of the refinery workers started.

In the first stage, the refinery staff established emergency committees and managed to stop any oil substances spilling, despite the destruction of installations under heavy bombardment.

Using technical and engineering facilities at the refinery to support the war was another case in point. The regular Army, the Islamic Revolution Guards Corps (IRGC) and other fighting forces used the refinery for their repairs.

In October 1988, several months after Iran accepted the UN-brokered Resolution 598, staff from refineries across the country rushed to help Abadan. In the following years, a three-phase development plan was implemented for the refinery.

The development phases of the Abadan oil refinery will be completed in the coming years, and Iran will once more become the owner of one of the most important and most modern oil treatment facilities in the world.