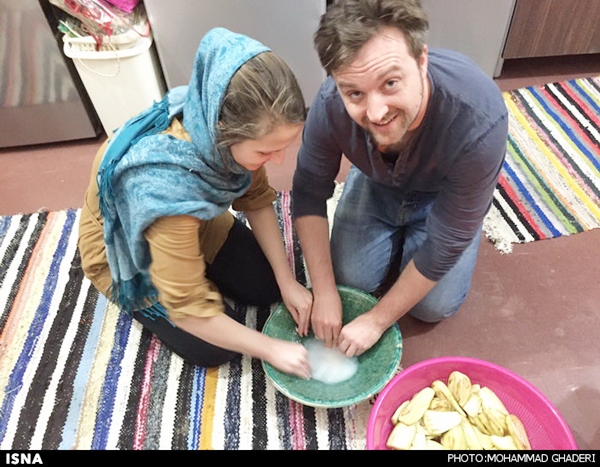 Anne Perak and Helen General are a young Dutch couple who have chosen Iran for their one month holiday. Now, after trying so many Persian foods, they have decided to learn how to make Kashk-e-bademjan.

As reported by ISNA, Anne, a Dutch cinema actor who thinks his name is quite feminine, and Helen, who is a doctor, insisted on making this journey even though their visa process took longer than they expected.

They started their journey from Rasht, and after visiting Masouleh and experiencing Gilaki food (from Gilan province) and loving Morgh-e-torsh and Fesenjan, they moved toward Semnan and Damghan. The Dutch couple tried Kashk-e-bademjan on the first day of their stay in the village of Mesr, and immediately decided to learn the local recipe for it.

They say, “There are plenty of vegetarian options in Iranian cuisine, and since we have many vegetarian friends back in the Netherlands, we have decided to learn how to cook some of them, like Kashk-e-bademjan, which is extremely tasty.”

He then compared it to Bollywood cinema: “Even though India spends a lot of effort on spreading its cinema, I have never followed Bollywood movies.”

They talked about their reasons for traveling to Iran, and said, “Our friends have traveled to many countries around the world, and they said many good things about Iran. We also have Iranian friends back in Holland. For these reasons, we decided that we must see Iran with our own eyes.”

They will visit Isfahan, Shiraz, Yazd and Kerman in their one month stay in Iran.

This Dutch couple later will leave Iran to go to India for two weeks before travelling to Thailand and Mongolia. They believe that even though all Asians are very hospitable (especially East Asians), Iranian hospitality is even greater.

Anne added, “During our journey in Gilan province, every time we tried to tip the people working in the hotels or restaurants we were staying in, they would refuse it. They said that we were their guests and that they couldn’t accept it.”

Anne and Helen have already decided that they will come back to Iran, because they believe that Iran has a lot to see.